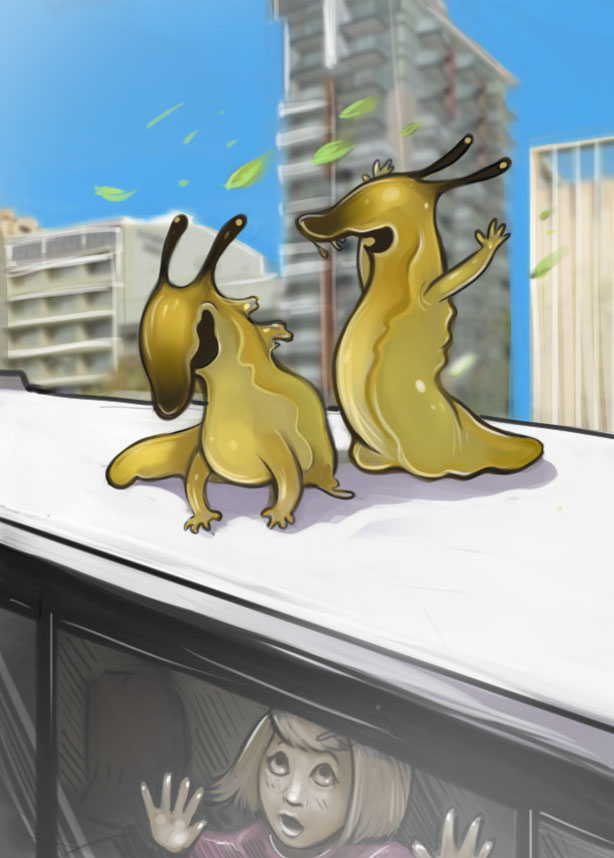 You’ve heard the humans say that 14 Pieces represents the opalised spine of an extinct 100-million year old marine reptile displayed inside the South Australian Museum. They’re mostly right, even if the Colonel, a distant relative living in a Never Galaxy moon swamp, would probably refute the extinct part.

What the humans don’t know is that each granite sculpture of 14 Pieces is expertly fitted with a Never Galaxy Gulp Pod – a unique, living device that you use to pack and store some of your most precious treasures. If your memory serves you correctly, one of them is a Moodling detector.

All of a sudden your attention is drawn to a persistent flapping sound. It’s not the leaves above or the pigeons, but the Moodlings! They’re in their natural state, brown and gelatinous, like giant Earth slugs, riding east down North Terrace on the roof of a city bus, their jowls flapping with the same enthusiasm as a dog from a car window.

When no humans are looking, you place your clawed hand on the smooth, wet surface of a small Gulp Pod and push on the metallic button in its centre.

The granite softens to the consistency of moon jelly jam and you extend your arm into the pod, extracting a palm-sized cube. You place it on the pavement and it starts to unfold into… a set of organ pipes? When you hastily stuff the pipes back into the Gulp Pod, it burps and spits out another cube.

A garden gnome, a paddling pool and two jumping castles later, one of the cubes finally disgorges the Moodling detector. That’s when a big, blue Narl hand grabs your wrist from behind…

“I’ve got him, Shorty,” says the Narl. “We celebrate with blabberworm pie tonight!”

“Yes, Boss!” says Shorty, licking his lips. “No one misses curfew on our watch and gets away with it!”

Instinctively, you plunge your hand into the nearest Gulp Pod and retrieve a handful of Never Galaxy levitation dust. You throw it at the Narl, who grunt, sneeze and then squawk as their feet lift from the ground and they begin to float like drunken balloons.

“We’ll get you for this, Captain!” says Boss, a muddle of arms and legs. Aware the levitation dust will wear off soon, it’s time to get out of here. Only problem is, your detector is pointing you in opposite directions!

Girl on Slide Sculpture: Follow the Moodling detector’s signal back to Rundle Mall to the Girl on Slide sculpture. You can be there in a jiffy.