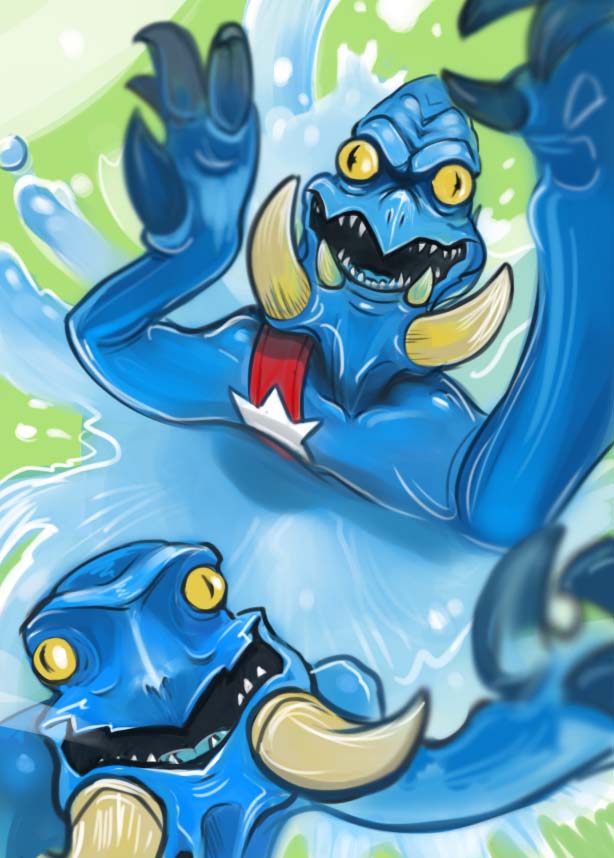 It’s funny; you don’t recall seeing a giant concrete thong on Colonel Light’s plan for the City of Adelaide back in 1836, but judging by the shimmer on every backyard-inspired sculpture in the park, it has proven a captivating playground for Moodlings.

You head towards the centre of the Square to investigate, but as you pass the clothes peg your instincts kick in… Too late. Water erupts from the hose and threatens to knock you off your feet. You clamber up the tallest blade of grass you can find and watch the hose whip around like a Never Galaxy slobber snake. It rears its head as if to strike, and the Narl catapult from its jaws and hurtle towards you…

When you come to, you’re lying in a pool of receding water with the Narl using your chest as a trampoline. Are they trying to resuscitate you or tenderise you?

They grip your arms and lift you to your feet so that you’re level with their big blue belly buttons. You look up past their fangs to their bulging yellow eyes and wonder if humans might mistake their rubbery blue skin for a trendy onesie.

“Got him Shorty?” the taller one asks.

While Shorty registers your claw print into a wrist device, Boss pokes you in the eye.

“Captain, you are hereby charged with violating your Never Galaxy curfew and resisting arrest. We sentence you to…”

Shorty punches some numbers into his wrist device and mutters, “Subtract the Captain’s curfew from the current Never Galaxy time, multiply by four light years and three blabberworm pies going cold, and that makes…”

Shorty licks his lips and Boss drools at the thought of a lifetime of moon jelly jam.

While others might run from the thunderous rumbling of hungry Narl tummies, you hear opportunity knocking.

“Have you sampled any Earth delicacies?” you ask with a charming smile.

Before you know it you’ve convinced the Narl to take a street food tour of Rundle Mall and leave you hog-tied to the metal ribs of the concrete fish with a bit of old rope.

Wondering how you’re going to exclude this little episode from your memoirs, you feel the rope holding you captive loosen, then dissolve into a brown, gelatinous puddle. The Moodling! It slides up your coat, across your shoulder and nuzzles your neck. Clearly it thinks you’re a better bet than the Narl!

You cement this impression by giving it a pat on the head, causing it to purr. You have one more Moodling to find, and now you have the ideal bait: another Moodling.

Adelaide Arcade: Take a chance that the Moodling from 14 Pieces is still heading east on North Terrace towards Bonython Hall. The Moodling on your shoulder might be able to help you intercept it!

Bonython Hall: Retrace your steps to Adelaide Arcade where a famed ‘ghost’ might assist your quest? His propensity for fun may be just the ticket to attract the other Moodling.