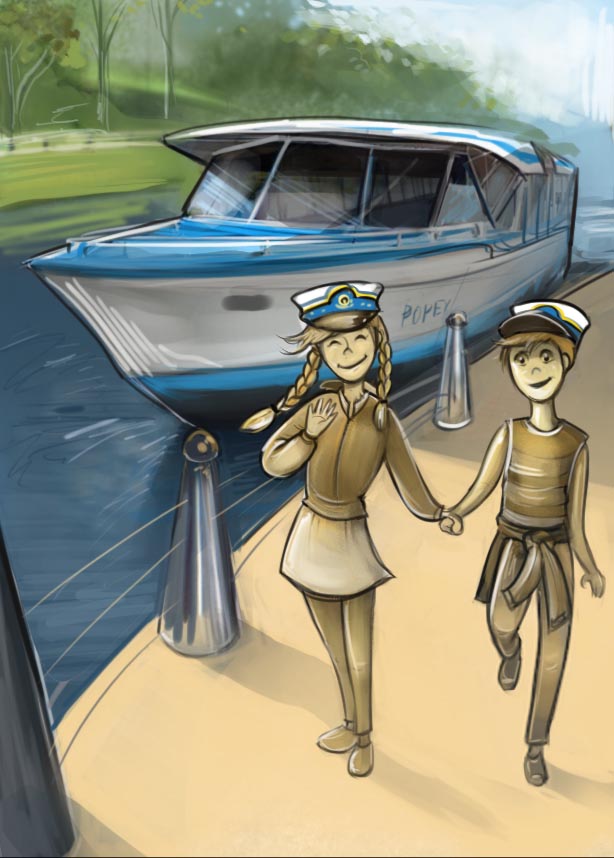 Phew! You flash your forked tongue over your face as you look across the colourful paddle-boats, many with their own sun umbrellas, lined up along the bank of the River Torrens. A black swan circles the boats as though keeping guard.

You avoided becoming a Narl delicacy by the skin of your teeth, and now you can’t help wondering if the Moodlings and their silly games are worth the risk.

You gaze over Elder Park and the zinc-domed Rotunda to the east – a gift from Sir Thomas Elder, manufactured at a Glasgow foundry and shipped from London in 1882.

With its raised base the Rotunda offers an excellent vantage point to view the city and the river, while, the octagonal brick and bluestone chamber that’s built beneath is the ideal spot to store emergency supplies…

You decide to enlist Captain Jolley’s help, but you can’t see anyone that looks anything like a Captain, certainly no one with a coat or hat as smart as yours. You decide instead to borrow one of his paddle boats to search for the Moodling that landed in the water, when…

Your attention is drawn by the sound of the ‘Popeye’ – one of the large white, recreational barges with distinctive blue stripes that putts up and down the river – returning to its landing beside the paddle boats.

You breathe a sigh of relief and wave at Captain Jolley. As the barge draws closer, you realise there are two Captains aboard – no, make that two Moodlings wearing Captain’s hats, in the same small human form that they were in when they left your ship.

They park the barge and skip down the steps and over to you, holding hands and grinning.

“Captain!” The other takes your hand. “That was the best game of Hide and Seek ever!”

You muster a charming smile.

“Yes! Indeed! I aim to please!” you say. “What’s say we get back the ship, eh?” A little too quickly you grab each of their hands in a death grip.

“Hold it right there!” booms a titan of a voice.

It’s the Narl lumbering towards you from the east, on the River Torrens Linear Park trail, pushing human walkers, riders and cyclists aside. Dragging the Moodlings behind you as if they weigh nothing you make a dash for the Rotunda, and your stash of supplies, hoping to the Never God that you remembered to put something useful in there!

But the Narl are faster than you remember and you reach the Rotunda at the same moment. The Moodlings, forever looking for an excuse for mayhem, transform into their natural forms, oozing from your grip to bound forward, striking the Narl in the face and dashing off around the Rotunda. The Narl give chase, with you close behind, and soon it becomes difficult to tell who is chasing who.

It all comes to an abrupt end when dizziness causes you to trip and fall sprawling, your face inches from the hatch full of emergency supplies.

You manage to prise the hatch, groping around for anything remotely useful, when your fingers hit an open bag containing some kind of powdery substance. Yes! You roll onto your back and throw a handful of levitation dust into the faces of the two Narl who are about to trample you in a dizzy rage. Within seconds, the Narl lift off the ground, a tangled mass of blue limbs with bulging yellow eyes.

You watch the Narl drift out over the river and east over the Adelaide Bridge like electric blue blimps. While the Moodlings – small humans once more – observe the spectacle in entranced delight, you seize the opportunity to hoist one under each arm march them back to your faithful ship.

This is the end of your adventure but you can head back to the starting point to explore a different story path, or you can try the other Story City: Adelaide adventure, The Adelaide Time Caper.