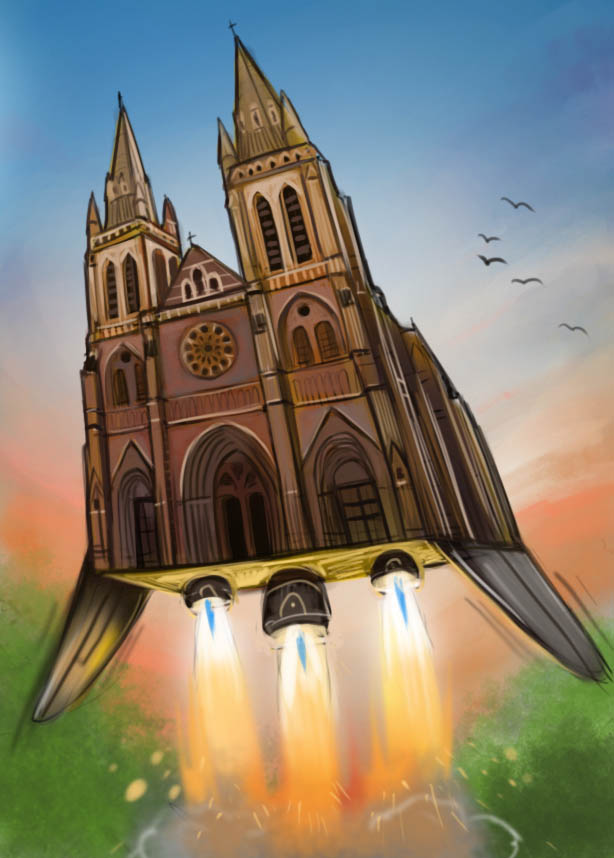 You collapse onto the lawn beside the Sir Donald Bradman statue to catch your breath.

As you gaze up at the iconic sporting figure towering above you, you recall watching The Don – as he became known – score a rapid-fire 118 runs against South Australia in his first-class cricketing debut here in 1927, your first introduction to the popular Earth game.

Soon, a collection of human tourists hovering around the statue has you springing to your feet.

“Are you the Captain?” one asks, wearing a colourful shirt and thongs, and clutching his passport.

“When are we taking off?” he asks, “I had to dip into my retirement fund, but I managed to get a first class ticket! Is it true that it’s rude to wear clothes up there?”

You nod reservedly as you start to smell an entrepreneurial rat.

A well-dressed tour guide emerges from the East Gate of Adelaide Oval and joins the group.

“Captain! I’m so glad you could make it!” says the guide with a smile. “It’s We Hide, the Moodling! You Seek is just getting the ship ready for our first flight. We had so much fun with you today that you inspired us to start our own business – ‘Never Galaxy Unplugged’! Chartering wealthy Earth tourists to the Never Galaxy!”

You muster your best angry face, but you can’t help finding the concept ingenious! In fact, you kick yourself for not coming up with it first…

Moon rocks! You hear engines powering up and look around nervously as bells begin to toll at St. Peter’s Cathedral to the north.

“Oi, Captain! That’s our ship!” Boss yells, lumbering towards you from King William Street, Shorty close behind. Before you know it Boss has you in a vice-like grip with one hand and is pointing over the trees at the Cathedral with the other.

When you see the Cathedral’s towers vibrate you look to the Moodling for help only to find she and her tourists have vanished.

You soon hear the Cathedral engage thrusters, then see it hover for a moment before shooting into the slipstream. In that second you think you can make out the humans, pressed to the windows of the Cathedral’s towers, and the Moodlings, in their natural form, waving their gelatinous jowls.

A low growl of disgruntled Narl is distressingly close to your ear. Given that Never Galaxy law dictates that a Captain is responsible for the actions of his passengers, you take their guttural rumblings to mean that you now owe the Narl a ship.

You whistle for your ship to pick you up, and, with a big blue hand weighing heavily on each shoulder, you cross your claws that you conjure a deal with the Narl on the journey home that doesn’t involve you being baked, battered or fried.

Ouch! Bad Luck! This is the end of your adventure but you can head back to the starting point to explore a different story path, or you can try the other Story City: Adelaide adventure, The Adelaide Time Caper.