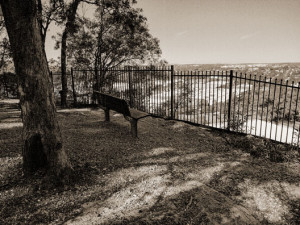 You don’t know whether you’re out of breath from the steep climb up the steps to Pegg’s Lookout, or puffing from anxiety about being caught by soldiers. Whichever it is, you’re grateful for the seat at the top. But as you go to sit down, you trip over a rock that juts from the ground. There’s a click, then a hatch beneath the seat pops open.

You crouch and lift the hatch. A ladder leads down into a deep hole. There’s a dim light far below you. You can’t believe your luck. This is your chance to get the evidence you need to keep you out of trouble.

Squeezing beneath the seat, you climb down the ladder. It’s dark and hot inside. Sweat beads on your face and your palms grow slippery. When you reach the bottom, you find yourself in a narrow tunnel. The walls and ceiling are polished rock. Hearing voices, you creep along the tunnel to a cavern. Computers and surveillance equipment line the walls. Soldiers wearing headphones work at various stations. But then you hear something that makes you fume.

“Captain. Damo54 reported in,” a soldier at a station says. “He’s lost the suspect’s trail.”

“Call him in,” the Captain says. “And get that information uploaded.”

On one of the computers, the photos you took on your trek around Salisbury appear on the screen. You press against the wall. The evidence against you looks bad. It might be best if you get as far away from Salisbury as you can. But when you turn around, you run smack into a person who can only be Damo54.

Before you can run, he slams you against the wall and twists your arm behind your back.

The Captain rushes from the cavern. Seeing you, he smirks. “So you’re our trouble maker?” he says.

You twist around and glare at Damo54. “Since when did you decide to work for the military?”

Damo54 grins. “Since trouble makers like you decided to poke your nose into things you shouldn’t.”

You turn back to the Captain. “What is this place?”

The Captain waves Damo54 forward. He shoves you ahead of him, but doesn’t let you go.

“This place is the first line of defence against threats to Brisbane city, either from the ground or the air,” the Captain says in a smug tone. “I take it you’ve seen the view from Pegg’s Lookout?”

That explains the ladder. From Pegg’s Lookout, the whole of Salisbury can be seen. “Why the secrecy?” you ask.

“That’s how it’s always been. This surveillance bunker was built during World War Two to keep an eye on the Americans while they were here.” His eyes glint. “Can’t have a visiting army privy to our defence strategies, even if they were allies at the time.” He rolls his shoulders back and fixes you with a piercing stare. “I’m afraid we’ll have to keep you detained. I can’t have you running around exposing military secrets.”

“I wouldn’t worry about that,” Damo54 says. “It’s not been too hard discrediting Rumours Uncut.”

You break his hold and turn on him. “Were you trying to lead me astray? People don’t like secrets. They want the truth.”

“The truth is Salisbury is a magnet for spies intent on searching for a weakness in our defence network,” the Captain says. “Either you agree, or you go to jail for a very long time.”

“You can’t keep a rumour secret. I’m not the only one who will come to Salisbury to search for buried ammunition.”

“Sending in soldiers to threaten people is not how you create trust in a community.” You turn back to the Captain. “If you let the people of Salisbury know what you’re doing, you won’t need someone like Damo54 doing your dirty work. Community spirit will do a better job protecting a secret like this.”

“Perhaps,” the captain says. “But I’m not at liberty to take that chance. National security is at stake. Now, what do I do with you?”

You’ve no doubt you’ll be sent to jail. Your only chance is to escape this bunker and expose the truth. Isn’t that why you started Rumours Uncut? There are too many cover-ups in this world. You’re not going to be another one.

Damo54 stands behind you, but you have nothing to lose. Slamming your elbow into his stomach, you shove past him and run back through the tunnel. When you reach the ladder, you climb as fast as you can. Damo54 is on your heels but when you reach the hatch, you scramble out and slam it down. Then you find the biggest rock you can and roll it over the hatch to keep it closed.

By trapping Damo54 in the tunnel, you’ve gained a head start. But not by much. As soon as you reach the streets of Salisbury, you clear out and bunker down at a friend’s house. Borrowing a computer, you post an update on your page:

Rumours Uncut Alert. I’ve just escaped from a secret military base which is hidden beneath the Toohey Forest.

As if there’d be a military base beneath a forest. Starting another rumour, Rumours Uncut?

You smile. Damo54 might convince people your claim is only rumour, but he’ll have his hands full when they arrive in Salisbury to discover the truth for themselves.