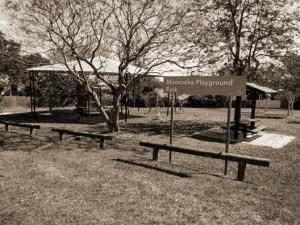 What made you think you could sneak away from a ghost? Or walk around a block? Raynham Street ran straight ahead and now you’re in a park that’s nowhere near the munitions area. And you’re facing a furious Sam. He appeared in a blustery wind the moment you arrived at the park. As you cower before him, he throws his hands in the air and his whole body ripples with anger.

You start to explain the lure of finding a bigger secret but you’re cut off by the sound of sirens. In the distance, three police cars screech into Evans Road, followed by an ambulance, its lights flashing. Then your phone beeps:

Damo54 has been shot by a soldier. He was caught breaking into an abandoned military factory. Rumour is he’s dead. Is it true?

Your heart leaps into your mouth. You were wrong not to take Sam’s warning seriously. That soldier meant business. Feeling faint, you sit down on the park bench. Sam stands in front of you, his hands on his hips, a scowl on his face. Then he throws his hands up in the air and disperses in a rush of icy air.

You doubt you’ll see him again. And though Damo54 made you fume with his tactics to discredit you, the last thing you want is him dead. You turn off your phone and abandon this rumour busting hunt. It might be best to leave Salisbury’s secrets buried.