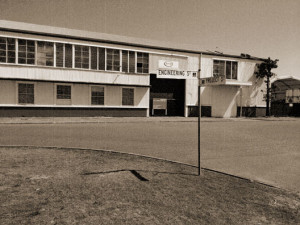 You no sooner reach the corner of Project Street when Damo54 bursts through a door in the huge abandoned factory opposite you.

Behind him, a billowing black cloud escapes through a door and spreads across Engineering Street. Your eyes widen. “What have you done?”

Damo54 skids to a stop next to you. “I found an interrogation room in the factory.” He starts to run again. “We’ve got to get out of here.”

Seeing the black cloud move in your direction, you turn and run alongside him. “What is that?”

“An army of enemy ghosts. The ones that were captured and interrogated during the war.”

You look over your shoulder. The black cloud consumes Project Street. Enemy soldiers brandishing weapons emerge onto Evans Road. You slow down. “Wait. What are they going to do?”

“What do you think?” Damo54 says. “Finish what they started. Invade Salisbury. It’s World War Two all over again.”

You grab Damo54’s arm, pull him behind the next building and shove him against the wall. “You chicken. You released a dead army and you’re running away? We have to warn someone. What if people get hurt?”

Damo54 hesitates. “How do you fight an army of ghosts?”

“With a ghost army of our own.”

Grabbing his arm, you drag him from the building. You have to find Sam. He’ll know how to call an allied army of ghosts. But as you run with Damo54 along the street, the black cloud descends on you and you’re surrounded by enemy soldiers. They shout at you in a foreign language. Damo54 screams for help. You punch at the cloud. But there are too many soldiers. Both you and Damo54 are captured and dragged back to Engineering Street.

The soldiers ignore you and shove you through the door of the factory. You fall onto your knees. Damo54 lands beside you in a crumpled heap. The door slams shut, plunging you into darkness. Damo54 whimpers but another sound sends a shiver up your spine—the unearthly chatter of ghosts. A hostile presence fills the empty room. And then Damo54 screams.