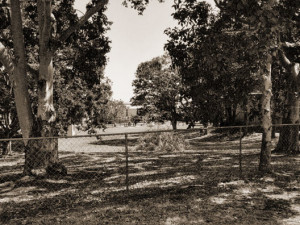 When you arrive at the northern end of the Salisbury RSL Memorial park, the first thing you do is update your status to counter Damo54’s damaging posts and claw back your followers:

Lots of old war factories along this street. What do you think? Could the ammo be buried around here?

The comments pour in, providing useful information about the area. Like how the buildings that line the street used to be the bullet making factories, and how the large factory back in Textile Crescent was taken over by the American Air Force to recondition aircraft engines in 1943. That comment leads to speculation that American soldiers took the ammunition, but a following comment catches your attention:

Nothing will be buried around here. Too much rock.

The comment is right. This area backs onto Toohey Forest which extends from Toohey Mountain in Moorooka’s east. Aside from the memorial park, there’s nothing in this part of the suburb but road and rock. But the post thread stalls with a comment about wildflowers. Rolling your eyes at the useless information, you turn back to the park and look for Sam.

You see him hovering near a gate in the fence that borders the park but you glimpse movement in the trees. Some kind of fog hangs around the trunks and makes a shiver creep up your spine. You expect to see another ghost, but you’re distracted by Sam. He beckons to you and then drifts further along Commerce Street.

Not wanting to lose him, you start to follow, but a military jeep drives around the corner of Industries Road and screeches to a stop in front of you.

A soldier jumps from the jeep. “You’ve been seen taking photos of the area. Why?” His hand drops to a firearm on his belt.

The soldier sneers. “Wildflowers. On this road?”

“Not the road. In the park.” You point towards the trees.

The soldier looks at the phone in your hand. “Hand it over.”

You don’t want to, but what choice do you have? But as you hand over your phone, it buzzes and displays another comment:

The best flower displays are in the road cutting at the top of Industries Road.

The soldier reads the message, then hands back the phone. “Move about your business,” he says. “But I don’t want to see you loitering around here.” He strides back to the jeep and then drives back the way he came.

When he’s out of sight, you sigh. But why is there a soldier in an area where there’s been no military activity since the end of the war? It doesn’t make sense, but you don’t have a Facebook page called Rumours Uncut for nothing. Is there another secret in Salisbury, one not even Damo54 knows about? But with Sam out of sight, and the jeep speeding up the hill, you need to decide what to do next.

Davey Street: The soldier rattled you but you can’t ignore the possibility of a bigger secret than buried ammunition. And even better, if Damo54 doesn’t know about it, you could end up revealing two secrets instead of one. You decide to follow the jeep and try to find where it came from. Continue along Commerce Street. Turn right up Industries road and go up the hill to the five-way roundabout at Davey Street.

Standish Street: You’re convinced Sam is leading you to the ammunition so, military or not, you’re not going to lose his trail. Continue along Commerce Street. Turn right into Industries Road then left into Raynham Street. Continue until you reach the corner of Raynham and Standish Street and stand where you can see the southern area of the munitions factories.