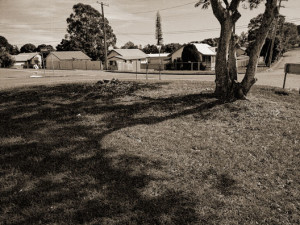 You should have walked faster. The military jeep is nowhere in sight. Who knows which direction it went? Having left the munitions site, you stand in a residential area. There are some big buildings further along Davey Street, but mostly all you see is houses.

If there’s military activity, it’s not around here. You followers helped you the last time you posted an update. Maybe they can help you again? You snap a photo of the roundabout and street signs and post a new status:

Chased a military jeep but hit a five-way crossroad. Can’t see the jeep anywhere. What do you think? Which way did it go?

You’re in luck. Your followers are keen to get in on the action and post comments about the military jeep. Most comments speculate on why a soldier would be driving around the streets of Salisbury, but one comment grabs your attention:

Maybe the jeep went underground? An air raid bunker and a tunnel were found beneath the Salisbury State School after a fire burnt down a building in 2002.

An underground tunnel? Is that what the soldier didn’t want you to find? You do a quick Google search for the state schools, but both are too far away to be of significance. You look further along Davey Street to Toohey Forest in the distance. Could the secluded bushland hide an entrance to a tunnel? The forest overlooks Commerce Street so it would explain how you’ve been seen taking photos. But if they built a tunnel, where does it lead?

Your mind churns with possibilities but you’re not sure how to proceed. Chasing a ghost is one thing. Chasing a real soldier is another.

Standish Street: Although you’re tempted to hunt for a tunnel, you’re suspicious about the soldier’s motives. What if you were close to finding the ammunition and the soldier was sent to stop you? Or, what if it was Damo54 who alerted the military? He knows you’re taking photos. Was the soldier a ploy by Damo54 to lead you astray? You decide to go back and catch up to Sam and resume your hunt for the ammunition. Take the right branch of Industries Road, keep to the right and follow Raynham Street until you reach the corner of Raynham and Standish Street.

Toohey Forest: Digging is what you do and if there’s a bigger secret in Salisbury, you want to find out what it is. You decide to search for clues in Toohey Forest. And you’ll check the buildings for evidence of tunnels on the way. Continue east along Davey Street until you reach the entrance of Toohey Forest on the corner of Davey Street and Tarragindi Road.