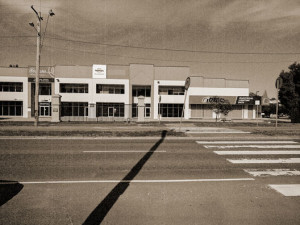 You lost sight of Sam somewhere along Standish Street, because you were too busy taking photos as you walked. The old war factories that lined the street were impressive. Nearly all of them now house a manufacturing business but none of the buildings have lost their war-time character.

As you stand at the pedestrian crossing on Evans Road, bullet factories and mess halls fill the landscape as far as you can see. To keep your Rumours Uncut page active, you upload some photos of Evans Road and of the war buildings closest to you. The response is great and comments pour in:

Hard to imagine the buildings haven’t changed in so many years.

Evans Road used to be called Compo Road. A tram line ran along it from Moorooka to service the factories during the war.

You can’t see any evidence of a tram line, but you’re not about to doubt your followers. So far, they’ve proved a wealth of information. You turn your attention back to your location. Sam hasn’t reappeared but you think you know where he was taking you, and why. If you’re right, you know exactly where the ammunition is buried.

But when you look along Evans Road, you catch a glimpse of a person entering the southern side of the munitions site. Then you receive a notification on your phone. It’s from Damo54:

Where are you Rumours Uncut? Can’t find Engineering Street? Lots of interesting buildings around here. Or are you too busy chasing imaginary ghosts?

He’s on the southern side of Evan’s Road, and while you’re sure he has no idea where the ammunition is buried, is he about to reveal something else? You haven’t seen any sign of the soldier, so whatever Damo54 has can’t be significant. But though his baiting is irritating, you shouldn’t underestimate him. Maybe it’s time for some payback and beat him at his own game.

Memorial Park: You stay on track and finish your quest. You’re so close to revealing the location of the buried ammunition, you can taste the victory. And you suspect Damo54 is deliberately trying to lead you astray. You bet he’s got nothing to reveal. It’s time to finish this hunt and post a page rocking photo. Continue along Evans Road, turn left into Industries Road, continue to the left until you reach the Salisbury Memorial RSL Park.

Project Street: Damo54 could have something that will blast your page into cyberspace anonymity, but nothing would be sweeter than stealing his glory right out from under him. And you’ll double your victory. What have you got to lose? Cross at the pedestrian crossing, turn left, walk along Evans Road, turn right into Project Street, stop at the corner of Project and Engineering Street.