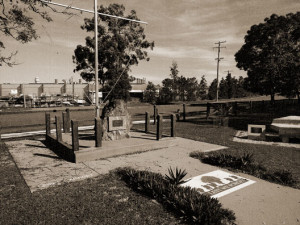 When you arrive at the Memorial Park, Sam hovers by the memorial rock. He grins and beckons you through the gate.

Entering the park, you stop in front of him. “The ammunition is buried here, isn’t it.”

When Sam nods, you look across the park to a gate in the fence that borders Commerce Street. “Why didn’t you take me through that gate? We could have saved a long walk.”

Sam swirls around you and shrouds you in his icy mist. You shiver, feeling like you’ve been doused in cold water, but as you look through the whiteness, the memorial rock and surrounding park are replaced by dense vegetation.

Darkness descends but Sam’s features grow clearer. And then he speaks.

“I had to lead you away from that soldier,” he says. “You were about to be arrested.”

Your eyes widen. “I can hear you.”

Sam turns and pushes through the vegetation. You start to follow, but a swish of fabric makes you stop. You look down and see you’re dressed in a jungle green uniform. You’re wearing a slouch hat. And you have a rifle slung over your shoulder. You call out to Sam in alarm.

“What’s happened? Where am I?”

Staying by Sam’s side, you push through the vegetation until you reach a stand of trees that’s thicker than you remember. And Commerce Street is a dirt road. From the look of the military activity around the factories, you’re back in 1943. But Sam is whispering to you.

“See that truck,” he says, pointing to a truck parked outside one of the factories. “The American Army is taking over that building for aircraft reconditioning. All the equipment is supposed to be transported to the Brisbane Barracks, but the General is stealing the ammunition for American soldiers.”

“What? The ammunition belongs to us. Why doesn’t someone stop him?”

Startled by movement in the trees, you look around and see a group of soldiers hiding, like you and Sam are. When one soldier holds up his hand, Sam whispers to you.

You tremble. “What are we doing?”

Sam grins. “Taking back what’s ours.”

At the other soldier’s signal, Sam jumps to his feet and runs to the back of the truck. You follow close behind. Under the cover of night, you help Sam and the soldiers break into the truck and steal the boxes of ammunition. The boxes are heavy and the bullets inside clink together. Struggling to carry one box, you follow Sam and carry it back to the park where you hide it among the trees. You repeat this over and over until all the boxes have been claimed. You lean against a tree to rest but Sam hands you a shovel.

Through midnight to dawn, you dig side by side with Sam and the other soldiers and bury the caches of ammunition deep within the centre of what will one day be the memorial park. You expect to strike rock, but the ground is soft.

“It’s a natural low point in the landscape,” Sam explains. “Anywhere else and we’d need explosives.”

By the time the dawn breaks, the heist is complete. Leaves and grass are scattered over the turned earth to camouflage the digging site. The other soldiers spread out through the park and post sentry, their rifles at ready.

“The American General leaves today,” Sam whispers. “Once he’s gone, the ammunition will be safe enough.”

“Won’t he search for it? I mean, we buried sixty boxes.”

You wipe dirt from your hands. “This is unbelievable. I have to take of photo of this.”

You reach for your phone, but instead pull a radio transmitter from your pocket. You stare at it. “Um, how do I get back to my time?”

“You’re not going back,” Sam says. “Someone has to make sure this part of history remains unchanged.”

Sam nods to the other soldiers. “You’re with us now. Every night, the heist is repeated. If the ammunition is stolen by the Americans, the future will change and we’ll end up at war.” He places his hand on your shoulder. “That can never happen.”

“I’m stuck here? And I’ll have to dig that hole again? How do I get out of this?”

Sam shrugs. “Find someone to take your place, like I did.” He grins then fades from sight.

Dumbfounded, you stare at the empty space in front of you. If Sam is right—and you don’t doubt him—you’d better go and hang around the building that becomes the Reload Cafe or you’ll be digging that hole every night for the rest of eternity. Hopefully, you’ll catch someone’s attention, like Sam caught yours.