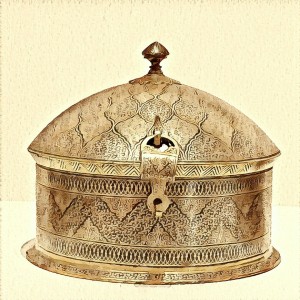 Of course! How could you not know? Melbourne – it was here that John Batman had entered into a mendacious treaty with the local Wurundjeri Elders: 243,000 hectares of land around Port Phillip Bay in exchange for blankets, knives, handkerchiefs and food rations. The bastard!

Suddenly, you feel a tap on your shoulder. You spin around. You find yourself staring at a tall, swarthy South Asian man. With curly black hair and a lantern jaw, he is almost handsome. But an ugly sneer mars his good looks.

“Who are you? Where is Saloni?” you ask hoarsely.

“It is good that you decided to help your friend. Otherwise, we would have had to get rid of her – by herself, she is quite useless to us,” he says with a malevolent grin, enjoying the look of panic spreading across your face. “Don’t worry, she will be fine as long as you follow our instructions.”

He gestures towards his hands, and you see he is holding a large black backpack. He hands it to you, turns around and rapidly disappears into the crowd.

The backpack feels light. As you unzip it, your eye catches a flash of something golden. You reach in and pull out a small domed casket of gilt copper with gorgeous gold leaf overlay. You know where you’ve seen it before: at NGV International in The Myer Family Gallery Asian art collection. This particular piece was made in 1870 using the delicate koftgari technique of hammering fine gold wire or gold leaf into intricate patterns on metal. Koftgari was brought to India from Iran and became a popular way of decorating firearms and armour in Punjab. The British colonisers, however, prohibited the local production of firearms in 1849. In desperation, the koftgari craftsmen began creating display items for international exhibitions and in the hope of attracting Western visitors to India. This fine example appeared at the great Melbourne International Exhibition in 1880, and was subsequently acquired by the National Gallery of Victoria.

It was one of the five priceless Indian artefacts stolen from the gallery last week in a daring heist. Why has the golden casket been handed to you? What are you supposed to do with it?

The next riddle pops up in the Story City app.

Find us a man’s best friend

Stolen once, but back at the end.

What could it mean? You will need to go to City Square to find out. You carefully place the precious copper casket back into the bag.

You walk down Swanston Street towards St Paul’s Cathedral and continue for one block until you arrive at City Square.