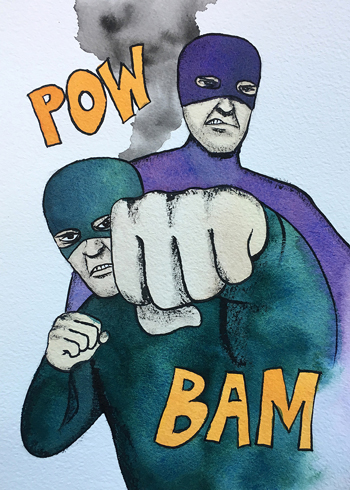 You follow the van on foot, somehow managing to keep track of it until Fort Street. Now the cylinder that you picked up from the petrol station is blinking and humming, which you hope means you’re in-range to make use of its sole purpose—as a universal tyre disruption device.

The tyre bursts in an impressive display of sparks and flapping rubber. The van fishtails and ends up against the kerb beside the canal. Figures wearing masks begin diving out of the van like clowns from a clown-car. Almost immediately they start arguing with each other about the best way to change the tyre.

You dash towards your enemies, the black smoke from the ship’s explosion rising up behind you. As you get closer one of the figures spins around and says, “Don’t suppose you know how to ‘elp a fella change ‘is tyre?”

Momentarily shocked by the masked miscreant’s request for help you almost offer advice. But then, you come back to yourself and shake off your distractions like an uncomfortable dog costume.

What happens next is a pop art explosion of BIFFs and BAMs. You dazzle yourself with your own martial arts expertise, moving in patterns as complicated as those drawn by a Spirograph. But no matter how many of the enemy you tumble comedically over the railings and into the canal, another two seem to appear.

So distracted are you by your own unexpected finesse, you don’t even realise they’ve procured a net from the back of the van…until they’ve tossed it over you. The more you attempt to break free, the tighter the netting seems to get.

As the masked figures close in around you, you notice your Handler standing a short distance away.

“I’m afraid there’s nothing I can do,” says your Handler impassively. The masked men make no indication they can even see your Handler. And then, without a sound, the image of your Handler promptly flickers and vanishes into thin air. You’re so surprised you can barely find it in you to struggle. What in the blazes have you gotten yourself into?

The masked men bundle you into the back of the van.

“Let’s get out of here,” says a female voice, obviously the get-away driver. The door slams shut behind you and the engine starts up.

Wherever they’re taking you, you’re sure it’s nowhere good. 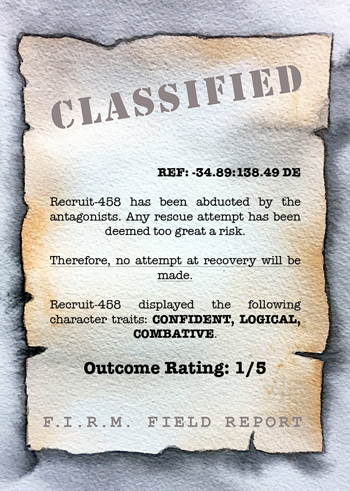 Oooo…Sticky Ending! Would you like to see what your other choice would have led to? If so, you can try a different story arm by heading back to Grange Jetty. Remember that it might take multiple attempts to piece together what The Firm are really up to.