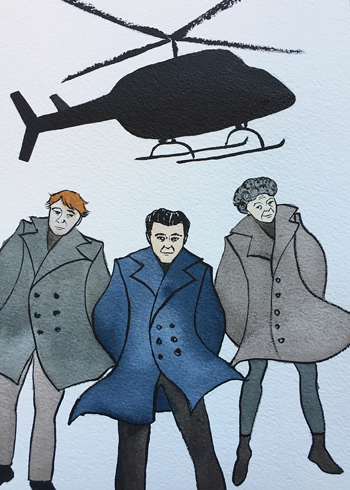 The park is picturesque. Vibrant and green, it stands in stark contrast to the disaster occurring behind you at the beach. The playground is similarly impressive, as you would expect for a disguised satellite array.

If there are children playing on the array, it is safe to assume that they are secret agents and are already working hard to reconfigure the satellite systems for you. Otherwise, you must approach the equipment and reconfigure the communications array yourself. First, have a mint to help kick your brain into gear.

The following instructions are reproduced here from section 96c of The Firm’s Operations Handbook, available from all good clandestine book-stores, and beamed directly into your phone by your Handler before he mysteriously disappeared…

First, you must locate the conical spinning circle apparatus. Orient this so that the smiling face points towards the sun. This ensures REDACTED.

Secondly, approach the panel featuring the moving beads, enabling REDACTED. You must arrange these beads in the following pattern so as to avoid REDACTED:

One grey bead on the far left

If this pattern is already visible, then another Firm agent has been here before you and has already configured the satellite. Feel free to ride on their coattails.

As the satellite array is configured, you hear a crackling that gradually fades away to silence. Then—the silence is replaced by the gentle rustling of leaves and a blast of warm air from above. You look up and notice that a strange craft has appeared above the playground—a helicopter, or something like it.

The vehicle hovers, but makes no sound. Strangely, there are no joins in the metal that it’s built from. No nuts or bolts or any other trace of human engineering. A square hatch opens in the underside of the craft and your Handler appears, drifting down towards the ground. He’s flanked by two other figures, also wearing trench coats.

“Well done,” says your Handler as he touches down on the woodchips. “Drones have been dispatched and are currently tracking down the enemy agents who launched that missile.”

“Furthermore, you’ve successfully re-established communications with our satellites. Steps are already being taken to remedy the damages caused by the explosion,” says the elderly lady to the left of your Handler.

“The Firm owes you a great debt,” your Handler continues. “You have acted unselfishly and with a cool-head under pressure.”

“Should you wish,” says the old lady. “You are eligible for future missions.”

“Don’t you think it’s time you let me in on what this is really about?” you ask.

Your Handler and the woman beside him exchange a furtive glance. The third figure, a bespectacled man with a wiry beard finally offers up an explanation, “The Firm is actually an acronym. It stands for: Future Intelligence Requisitions Management.”

“I’m not sure that helps me understand,” you frown.

“Let me put it like this,” your Handler says to you. “We’re from the future. There are things… unavoidable things…that are going to happen to this timeline that will make the future difficult. It’s the role of The FIRM to mitigate those changes, however we can.”

“By gentling jostling the past,” says the old lady.

“Or kicking it, when necessary,” says the man with the wiry beard.

“You will understand more in time,” your Handler offers. “For this is only the beginning.”

And you know that your Handler is telling the truth, for what is every ending but another beginning? 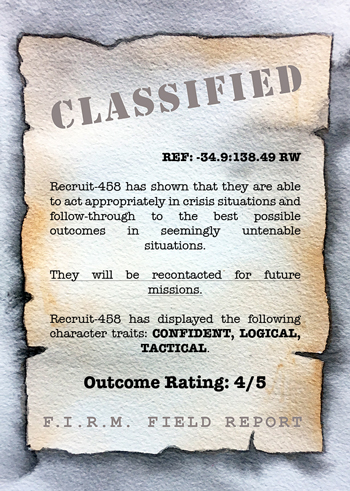 Congratulations, you succeeded in your mission!

But do you really know what The Firm is up to? Remember that it might take multiple attempts to uncover all the pieces of the mystery…

To unravel the mystery further head back to Grange Jetty, and try a different mission.