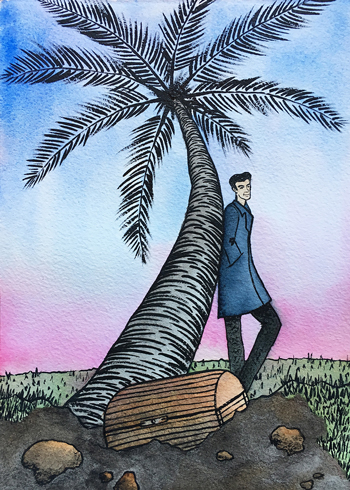 As you get closer to The Grange—Charles Sturt’s home before he returned to England—your phone begins to vibrate. As you pull it out of your pocket, it lets out a burst of static that very quickly resolves into a voice

DESPITE THE YEARS, THE PLACE SITS QUITE UNCHANGED,

THERE, DIG BENEATH THE LONELY TREE,

TO FIND THE WAY TO STURT’S INLAND SEA.

“The lonely tree…” you ponder, looking across the park. After a few moments you spot one tree standing on its own, a lonely palm!

A few people stop and stare as you begin tearing into the earth with your bare hands. A moment later a friendly passer-by, intrigued by your furious commitment, hands you a shovel.

Mounds of dirt rise around you and you stop for a break, leaning on the shovel and wiping your brow with the back of your hand. This might be a good time for a mint, if you have any, or perhaps a drink of water.

Not long after you resume digging, the tip of the shovel strikes something solid. You uncover a metal box, fitted with an oversized combination lock that’s encrusted with dirt. A crowd has now gathered around you and they begin shouting suggestions at you about what numbers you should try.

“Charles Sturt’s birth year!” says one voice amongst the throng and that suggestion seems to make sense. A plaque on a nearby stone has the year engraved on it, if you don’t already know…

The lock clicks open and you can feel your excitement rising. You push back the lid of the box and there is a sound (probably imagined) of fanfare.

The trunk contains dozens of tightly-sealed journals, miraculously intact after all these years. Tucked into one side of the trunk there is a rolled-up map of Australia. You unfurl it.

The map features an unlikely winding path through the centre of the country, surrounded by strange symbols and cryptic notations—including one that reads simply “Bunyip”.

“Thank you,” says a now-familiar voice and you look up to see your Handler standing over you. “The Firm, and indeed, all of Australia, is in your debt.”

“Don’t thank me,” you say. “This is all the work of Charles Sturt. And his wife, Charlotte, if I’m not mistaken.”

Your Handler nods. “Not only have you located the journals, but you’ve gained the greatest gift of all—knowledge. This information can be used to open up Central Australia to a new golden age of developmental opportunities and exploration. You will be rewarded.”

And as simply as that, he is gone, disappearing silently into the press of people around you. Amongst the crowd is one of the curators of the Charles Sturt museum.

“Well… I’ll be,” says the curator. “Normally you’d be in trouble for this sort of thing, but I think we can make an exception on this occasion. And to think, this treasure was buried right beneath our noses this entire time!”

With some help from the crowd the trunk is lifted from the hole in the earth and its contents are spread out for all to see. Inside there are drawings of native plants and animals and detailed stories about Charles Sturt’s expeditions.

You’re just about to excuse yourself from the festivities when a local reporter approaches and thrusts a microphone towards you. The interviews carry on well into the night, the media hailing you as a modern-day Charles Sturt yourself. An explorer, a treasure hunter. And, perhaps more importantly, a treasure finder.

But as you watch the people pawing over the contents of the buried chest, you can’t help but wonder just why Charles Sturt believed it was necessary to bury them in the first place. Perhaps there is something contained within them that is better left unknown… 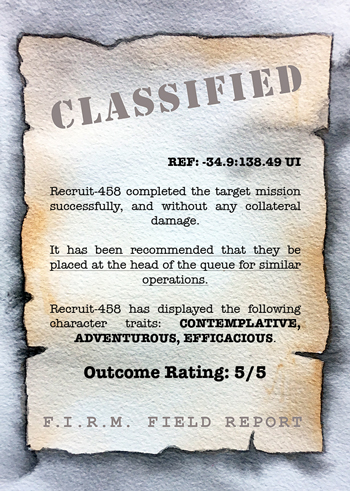 Congratulations, you succeeded in your mission!

But why would Charles Sturt hide his journals, and are The Firm what they seem? Remember that it might take multiple attempts to uncover all the pieces of the mystery…

To unravel the mystery further head back to Grange Jetty and try a different mission.