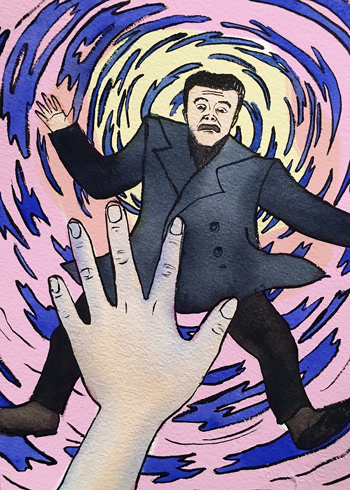 You follow after your Handler, attempting to stay far enough behind so that he won’t notice you’re there. As you walk you pay attention to the tall Norfolk Island pine trees that are planted in regular intervals along the street. The trees provide an impressive amount of shade and are large enough for you to duck behind should your Handler turn around.

But your Handler doesn’t turn around—not even once. You follow him towards the Baptist Church. As you approach you notice your quarry duck inside the building. Yet, only moments later, he reappears from a side door a short distance away, obviously attempting to throw off any would-be heroes that might be following him.

But you won’t be given the slip that easily!

You resume your chase but then suddenly, he spins around. Out in the open, there is no place for you to hide.

“Why did you follow me here?!” For the first time you see your Handler angry. He stalks towards you, looming.

“I deserve to know what’s going on,” you stand your ground defiantly.

“We needed you to discover Charles Sturt’s inland sea!” he growls. “My employers will not be pleased that you’ve failed in this task.”

“You’re talking about The Firm?”

“That all sounds terrible,” you say.

“What would you know!” your Handler snaps and now you can see that something else appears to be happening—your Handler is growing faint around the edges. His eyes are wide and he’s looking around as though terrified by something that he can see but you cannot.

“No!” your Handler says and it’s clear he’s not speaking to you anymore. “I can still succeed! Just give me another chance, another recruit to advise. We can still get the approvals that we need, we can…”

A sudden glimmer of light appears in the air behind your Handler, like a flicker of localised lightning that leaves the impression of electricity in the air. The hairs on the back of your neck stand on end.

The flicker of light expands and softens at the edges, creating a rippling portal in the air. Beyond the portal you can see three menacing looking figures sitting behind raised podiums, like judges in a court.

Your Handler looks to you pleadingly. Stretching out a hand towards you, he utters: “Help me recruit. We can still obtain the journals, if you’ll only agree…”

One thing is for certain—you want no part of The Firm’s plan to exploit Australia’s natural resources. You step towards your Handler. “You’ve failed,” you say loudly enough that your Handler’s employers should be able to hear you on the other side of the portal.

You place your hand against your Handler’s chest and, with the barest breath of effort, propel him back into the portal. There is a flash of light as the hole in the air snaffles him up; and then he’s gone.

And all of a sudden, the world seems peaceful again. The trees beside the church are gently rustling and it’s almost like they are thanking you. But you’re probably imagining that. 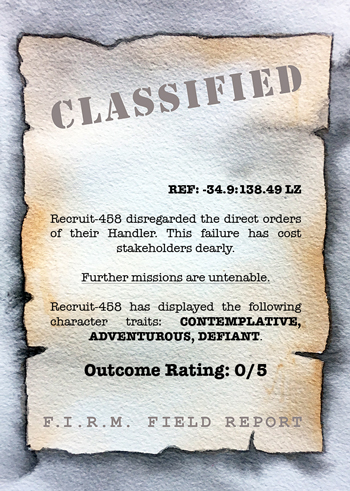 Congratulations, you’ve succeeded in uncovering some of the mystery of The Firm! But what else is there to learn about the organisation?

To unravel the mystery further head back to Grange Jetty and try a different mission.