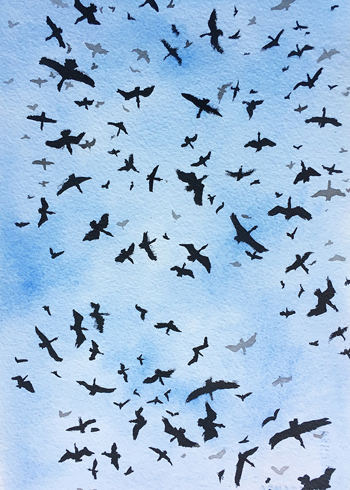 As you approach the playground you spot your Handler standing down by the water. There’s a duck sitting on his shoulder and several others paddling about nearby. This is a peaceful park, nestled away between suburban streets like an oasis. There’s a sense of sanctuary here.

“Did you know that you’re not supposed to feed the ducks with bread?” says your Handler as you arrive. “Apparently, it’s bad for their digestion.”

“What are you supposed to feed them, then?”

“In fact, there’s no need to feed them at all. They’re perfectly capable animals, in possession of all of the necessary faculties to feed themselves. They’re at one with the world around them, asking nothing of nature that it does not provide. But today, we’re going to make a small exception.”

Your Handler motions towards the stone drinking fountain set beside the creek. Inside is a crumpled paper bag that contains what appear to be seeds. “Feed them some of those.”

“I don’t understand,” you say, not for the first time today. “Didn’t you say there was some sort of weapon here somewhere?”

First, you treat yourself to a mint—why should the ducks get a treat and not you? Then you reach into the bag and scatter a few seeds for the ducks. Several of them waddle closer. At first, nothing exceptional seems to be happening, but you become gradually aware of a looming darkness and a strange sound like… the flapping of wings.

You look up and realise that hundreds—if not thousands—of ducks are descending on Kirkcaldy Reserve, desperate for a sample of these seemingly irresistible seeds.

The sound of the wings is overwhelming. Several ducks snap at the bag in your hands until it breaks apart and falls to the grass at your feet. The ducks swarm on the seeds, quacking and clacking their bills as they chow down on The Firm’s special recipe.

“This… is the weapon?” you ask as the wing of one especially rowdy duck buffets you in the face. Your Handler stands back and watches, that same duck still remaining perched, quite comfortably, on his shoulder.

“For too long humans have run riot over this planet,” your Handler says. The duck on his shoulder bobs his head as he speaks, as though agreeing. “It is time the natural order was rebalanced, and our billed compatriots take back the Earth.

“The Duckpocalypse is upon us.”

And unless you’d seen it for yourself, you would’ve thought he’d gone utterly quackers. 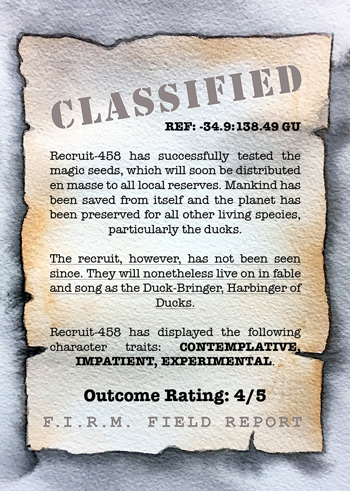 Oooo…Sticky Ending! Would you like to see what your other choice would have led to? If so, you can try a different story arm by heading back to Grange Jetty. Remember that it might take multiple attempts to piece together what The Firm are really up to…