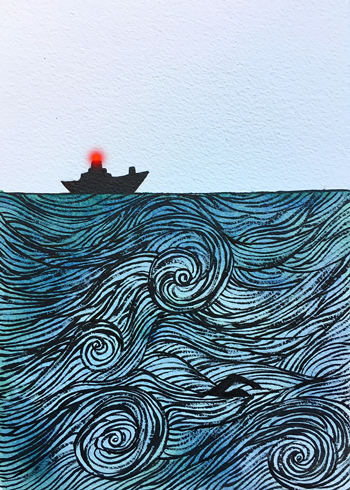 “Interesting choice,” says your Handler. He is standing beside an information board, a short distance away from the wrought-iron fencing and stone arches of The Marines. The building is strikingly anachronistic, staring wistfully across the ocean as though it’s trying to remember the time that it’s supposed to belong to.

“Everything changes, but nothing is forgotten,” your Handler says and draws your attention to a small plaque embedded into a hunk of blue-grey stone to the side of the info board.

“In 1955 a young boy lost his life here, in order to save the life of another. Thus the Surf Life Saving Club was created, in order to avert such tragedies in the future.”

Your Handler turns to you, as if weighing you with his eyes. “That too, is the role of The Firm, working against unseen forces to avoid future catastrophes. And, like that brave boy, storming into the surf, you have chosen the path of decisive action. Like a brown snake striking out at its prey, you’re driven by impulse and instinct.”

“There’s no snakes around here, is there?” you ask.

“Possibly.” Your Handler shrugs. “Nothing for you to worry about. The Firm has far more dangerous enemies than the native wildlife. Already they conspire against us.”

“Don’t you think it’s time you let me know what this is about?” you say.

“You have been recruited.” Fishing in one of his coat pockets, he removes a metal cylinder. Raising it to his lips he deposits a mint from the tube into his mouth. “Mint?” he asks and offers you the tube.

If you’ve brought any mints, now’s a good time to have one.

“The Firm needs people like you,” he continues. “People who are willing to take a chance.”

Somewhere beneath the Handler’s voluminous trench coat, something starts to beep. He raises a finger to his ear and his eyes glaze over. He’s listening to something.

“Our activities have been discovered and our enemies have found us,” he says to you, suddenly. “There is no time to explain. Look …”

Once more your Handler points out across the water at the squat shadow of the ship on the horizon. The blinking light above the decks has changed colour—a blazing red light now cuts across the ocean.

“A satellite-locked missile has been trained on that ship,” says your Handler. “If that missile is launched there’ll be no saving the operatives of The Firm who are on board. And that’s not to mention the environmental impacts that such an explosion would have.”

You imagine this pristine stretch of beach, ruined by an oil leak. You wonder if your Handler is sensationalising things, but there’s no doubting the fire in his eyes.

“Yet, by playing their hand, our enemies have revealed themselves. The transmitter for the missile’s tracking satellite is apparently in Cable Station Reserve, further down the beach.”

You’re about to move out when the Handler instructs you to stop. “Wait. There’s another option, but… it’s risky.”

“The Firm has been able to track the agents who are working against us. They are located nearby and it could be our best chance to stop our enemies – for good. But if we do so we will not be able to disable the tracking satellite in time…”

“So we let that ship explode?!” you ask.

Feel free to throw your hands in the air if you feel extra melodrama is required.

Your Handler shrugs. “The world is rarely black and white; every choice has a consequence. You can stop one missile, or you can stop an enemy who is capable of launching ten more. In any case, we must separate to avoid our enemies tracking us down.

“The decision is yours, Recruit-458,” and your Handler folds backwards into the Marines like a reverse origami…which you consider to be a rather peculiar way for somebody to leave a conversation.

If your Handler is capable of such astonishing magic tricks, you wonder what else The Firm might be capable of.

What are you going to do?

Cable Station Reserve: Rush to Cable Station Reserve to disable the satellite-tracking system and send the missile flying harmlessly off into the atmosphere? Continue following the path along the coast, past Terminus Street, until you reach the reserve.

Grange Train Station: Head to Grange Train Station in order to track down the agents responsible for launching the missile in the first place? Follow the coastal path to Terminus Street and then turn right. The train platform will be on your right, behind the petrol station. Look for the box with the letter T on it.