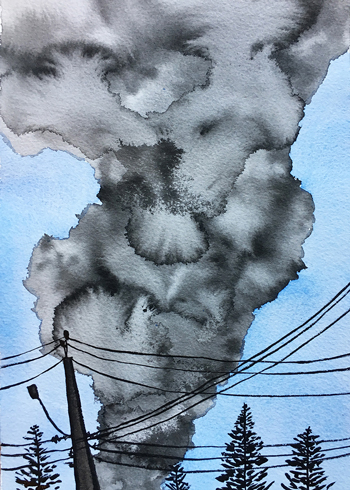 You’re becoming somewhat accustomed to your Handler arriving before you do. He seems to flit in and out of existence, as though he never really walks anywhere but… teleports? If only it were as simple for you to get around.

It’s easy enough to find the metal box with the letter T embossed onto it, located on one of the outer walls of the platform’s shelter.

“Where are the enemy agents?” you ask as you arrive.

Your Handler moves little more than a finger to indicate that you should look to the petrol station. A large crowd appears to have gathered there and a considerable hub-bub is taking place. You squint down at the crowd in order to try and discern what’s happening and notice three suspicious-looking men loading equipment into a van from a pile of wooden crates.

Suddenly, there is a sound like a violent crack of thunder. You look back towards the beach to see a plume of black smoke coiling up into the air. As quickly as that, any doubts that you may have had about your situation have vanished. The proof is written across the sky in billowing blackness.

Meanwhile, the people in the petrol station have scattered. Some have leapt into their cars and are speeding away; others are rushing towards the beach with their phones in hand, clamouring to capture the moment for the nightly news. The suspicious figures have retreated to their van, leaving behind some of their supplies in the rush.

“After them,” barks your Handler, stirring you to action. You leap down from the train platform and rush towards the boxes. You reach their abandoned crates just as the van screeches off down the street. Amongst the mess an item catches your eye, a cylindrical pipe decorated with flashing lights.

“That’s a universal tyre disruptor,” says your Handler urgently. “If you give chase, you may still catch them.”

“Or?” you ask, accustomed to your Handler offering more than one option.

“There’s a communications array nearby, disguised as a… well, as a children’s playground. If you configure the array correctly The Firm will be able to dispatch drones in order to take down the agents. Which may be prudent considering I may be of… limited usefulness should any physical altercations arise. Decide quickly, they’re getting away!”

The Canal: Chase the rogue agents to the Canal, in order to single-handedly bring them to justice with your universal tyre disruptor? Head through the petrol station and turn right onto Terminus Street. Turn left onto Charles Sturt Avenue and follow it to Fort Street. Then, make a right and keep walking until you reach the canal.

Children’s Playground Satellite Array: Will you attempt to reconfigure the communications array to release drones, using high-tech equipment that’s been disguised as a Children’s Playground? Head out of the station and turn left on Military Road. When you get to Jetty Street turn left and continue until you see a playground on your left, nestled behind a tennis court.