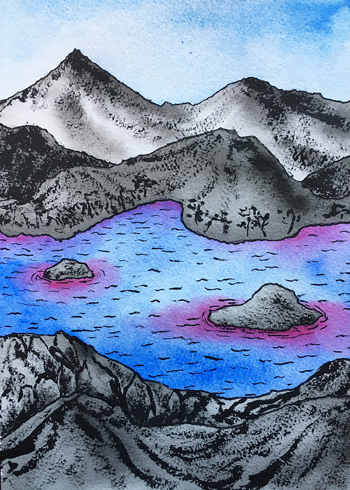 “You made it,” your Handler says as you approach Grange Hall. It’s disconcerting the way he always seems to vanish moments after giving you directions and then reappear, as if by magic, at the very location you’ve decided to travel to.

Grange Hall itself is relatively non-descript, save for its age. There is a utilitarian humility about the red bricks and the low peak of the roof.

“Once a week, for only an hour, the doors to this place open and it becomes… an art gallery,” your Handler muses. “But doesn’t that make you wonder what happens inside the rest of the time?”

The Handler shrugs. “Nonetheless, you’re here and that means that you’re ready for your first mission.”

Your Handler offers you a mint from a metal tube he keeps in his top pocket. “Grange was founded by the esteemed explorer Charles Sturt–”

“I thought I was getting a mission, not a history lesson,” you say with a roll of your eyes.

But your Handler ignores you. “Sturt was a gifted diplomat, renowned for his ability to foster beneficial relationships with indigenous peoples on many of his adventures. But above all, he was gripped by one particular obsession…”

“The inland sea,” you say, making hurry-on motions. “Yes, you said. But there’s no such thing.”

“We know that now, of course. Or at least, we think we do.” Your Handler studies you intently. “The Firm believes that there’s more to the story. Between the folding dunes of the desert—adrift amongst the shifting sandscapes—there may yet remain a path that is hidden, except to those who know the way.”

“Charles Sturt knew the way?” you ask. “To some sort of magical inland sea?”

“To find the truth, you must help us locate Charles Sturt’s lost journals.”

“Righhhhttttt…” you say. “Where would I find such a thing?”

“Thankfully, Charles Sturt’s own home is but a stone’s throw away from our current location. As Charles grew older his eyesight began to fail—his many days exploring the desert took its toll on him. The Firm believes that Charles narrated his journey to the inland sea to his wife, Charlotte, and had her bury those journals in the garden lest they fall… into the wrong hands.”

Your phone starts to crackle with feedback. “The coordinates have been transmitted to your device.”

“Aren’t you coming with me?”

“No,” your Handler says. “I have a far more dangerous mission to attend to. Now, you have received your orders, I suggest you follow them.”

With that your Handler swooshes away, the tails of his trench coat trailing behind him.

The Grange: Follow your orders and head to Charles Sturt’s home, The Grange, in order to search for his missing journals and locate the path to Australia’s mythical inland sea? Head away from the ocean by continuing to walk down Beach Street. At Swan Street turn left and then right onto Jetty Street. Once you pass the school, The Grange is in the park on your right.

Baptist Church: Feel that there’s something fishy going on? Instead, follow your Handler to the nearby Baptist Church, in order to find out just what his dangerous mission entails? Head straight down Beach Street to the corner of Surrey Street.