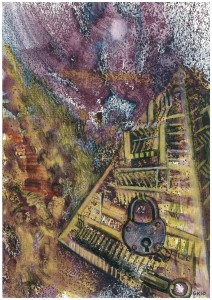 You arrive at the golden statues outside 348 Edward St, still cursing yourself for leaving Penny behind. She was putting on a brave face, back pressed against a concrete pylon, steel bar in her hands. There was still a tide of people washing out of the city, but none would stop to help you.

Behind the statues there’s an old concrete platform. Behind that, is a park and massive red staircase. You don’t look at it long, the blood red reminds you of Penny.

You hear gunshots, followed by a massive explosion that you feel as much as hear. Whatever’s going on, there’s nothing you can do. You turn your attention to the statues investigating each. One of them has a secret entrance.

From the park you hear screams, someone calling for help. You look up to see survivors running across the park. At first you can’t tell what they’re running from. Then one of the roaches clips a tree and momentarily loses its camouflage. They’re heading your way.

You scour the statues for something that looks like a door handle. The people reach the stairway, then barrel past.

“There’s a bunker under here, help me get in,” you scream.

Most of them ignore you and continue towards the city. But a man stops. He dressed in jeans and a tatty ‘They Might Be Giants’ t-shirt and clutching a steel post.

The bugs are on you. You can hear them, swooping, even though you can’t see them. The guy grabs tries to swipe them away. You get on your hands and knees and see a padlock, down low on the cube-shaped statue.

“Kind of busy.” But he hands it to you. He rocks back, face shimmering. He looks like he’s doing really bad mime. Then the roach hisses and drops its cloak. He’s got it by the throat. He spins around and lobs it towards the road. He picks up a branch dropped by his fleeing companions and backs towards you, swinging it back and forth.

You slam the steel bar against the padlock. It bounces off. You try again, and again. Sparks fly. You jam the bar down into the padlock’s hasp and twist, and the padlock pops open. Yanking it off and you press your fingers into the gap and pull.

The door squeals open. ” In here!”

The guy turns and follows you into darkness. The bugs dive for the doorway and as the guy swings the door shut, it closes on one of the bugs. It hisses at him, trying to scramble through the gap. You add your weight and pull, cutting the bug in two.

You both slump against the door, panting. Through the door you can hear the roaches still scratching, trying to find a way in.

You take out your phone and use its light to examine the door.

There’s a handle. You twist it up and down. Nothing happens. Shining your phone in the other direction, you illuminate a spiral staircase descending into the darkness.

You are safe. But trapped.

Thinking of Penny, you upload your photos to social media, tagging them #storycity and #mutantroach. Maybe this colleague of hers will be able to find you, once the heat dies down. Maybe you’ll win a prize for blowing the lid off the story of the century.