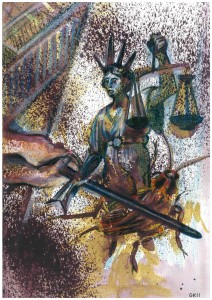 Horns are blaring. There’s the stink of exhaust fumes in the air. People are abandoning their cars.

The roaches are gathering above Roma Street. At first it was just three or four, but now more are joining them, like a storm cloud gathering.

The stairs and escalators are crammed with people. If the bugs swoop, there’s nowhere for them to go.

You duck, and a roach swoops over your head, landing on the ground in front of the stairway. It turns, tasting the air with its antennae. It’s joined by four of its friends. Then all four of them shimmer and disappear. People veer away in panic, diving back onto George Street.

You groan. “Justice? There is no justice!”

Then it hits you. Lady Justice. The sword of justice.

You grab Penny and gesture to the statue. “Help me.”

She helps you onto the plinth. For a moment you fear the sword is simply part of the statue, cast in one piece, but after wiggling it back and forth, you loosen it.

You hear the bugs coming for you. You wrench the sword free and swing blind, slicing one of the roaches in two. You squint, looking for the tell-tale shimmer of the cloaked bugs. There! You lash out, and knock another cockroach to the ground. Penny puts a heel through its head.

“Throw me the scales,” Penny says.

You edge to the other side of the statue. The bugs are in swarm mode now, swooping down on the terrified commuters. They attack the stairs and escalators, fading in and out of view. People dive off the sides just to get away.

You wrench the scales free and toss them down. Penny swings them over her head, catching a bug and knocking it to the ground.

You climb the stairs back to back, swinging and stabbing, working your way around the people stuck on the bridge across Roma Street, occasionally stepping on them when there is no other choice.

The bugs keep coming but you are in the zone, knocking them out of the sky every time they attack. You hear a train droning into the station and in that moment, you are sure you’re going to be on it.

As you push through the crowd inside, you take out your phone and upload your photos to social media, tagging them #storycity and #mutantroach.