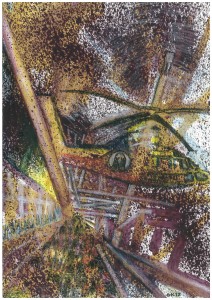 Kurilpa Bridge is heaving with people, and more are trying to press onto it. You and Penny join the mass, aware you’re exposed. You shuffle forward, people pressed in around you. Next to you, a mother carries a toddler, telling the boy over and over again that it’s going to be okay.

Below you the Riverside Expressway is choked with traffic. Further down a semi-trailer lies on its side, burning. Cockroaches hover in the air, settling on cars.

The cage opens up above you, exposing you even more. A roach alights on one of the bridge’s support cables, antennae twitching. The crowd shuffles nervously, no one wanting to even look at it. You turn back to the city and see clouds of bugs, swarming between the buildings. You don’t have much time.

Suddenly, the shuffle grinds to a halt. Around you, people start yelling out.

A heavy pounding noise drifts between the buildings and you see a military helicopter hove into view. People see it and start waving at it, begging for help. You crane your neck, trying to see what’s causing the hold-up, but can’t see. In desperation you climb up on the hand railing, holding onto a cable for balance. You reach into your pocket, checking your phone is safe.

There are troops at the other end of the bridge. One of them has a loud hailer.

“Turn back into the city!” the voice says. “The bridge isn’t safe!”

A man next to you yells back. “The city isn’t safe either, moron!” His retort is greeted with nervous laughter.

It all happens very quickly. The people on the bridge surge. The bugs, drawn by the sudden movement and noise, launch themselves at the fleeing people. The military helicopter pivots and looses a missile.

An explosion rocks the bridge. There’s now a gaping hole, where once there was a footpath. If it wasn’t for the bridge’s innovative design, the whole thing would have probably collapsed into the river. As it is, there are still steel pylons and cables that span the gap.

“Why are they shooting at the bridge? These bugs can fly!” you scream.

“C’mon!” you say. You offer Penny your hand and haul her up beside you.

Together, you shimmy along the cable, swing onto another cable. Below, you can see some people trying to follow you and Penny up into the cables. The river is full of bodies. Some of them aren’t moving.

The helicopter lets another missile fly, but it misses, passing through the cables and disappearing up the river. The bridge shudders and creaks towards the river.

Now, with the bridge collapsing, the tide of people turns back to the city, fighting the bugs that are attacking them as they move back onto Tank Street.

The soldiers on the other side of the bridge are firing on the chopper. As it turns to avoid the attack, you see the logo on the side. A big black bird on a white background. Blackwing.

Penny moves ahead of you. You’re out over the middle of the gap in the bridge. If you can make it over the gap, you’ll be able to drop down onto the footpath and run the rest of the way.

You hear the sizzle of the missile. Penny is reaching out for another cable.

The missile detonates underneath you. Shrapnel whizzes past your face. Another section of the footpath drops to the river below. Across the river, one of the Australian soldiers there takes out the helicopter with a surface-to-air missile, but you barely notice, because you’re reaching, in slow-motion, for Penny.

You wrap your legs around the cable, swing down and reach out. Your fingers brush Penny’s hair, miss it, then snag on her backpack. The screams, the burning sensation where the cable is tearing at your calf muscles, the stink of burning aviation fuel – all this feels far away.

Penny looks up at you. She reaches up with one arm, and you see the other hanging limply by her side, blood dripping into the river below. You can’t take her arm and the bag at the same time.

Suddenly the bridge lurches again, metal screaming on metal. Your fingers are on fire. You can’t hold on much longer.

You know what Penny is going to do, before she does it, but you’re powerless to stop her. She pulls the straps on the sides of the bag, and drops into the river below. You clutch the bag to you, gasping for air.

You can’t remember climbing down to the other side of the hole in the bridge, or the soldiers grabbing hold of you, dragging you to safety. The next thing you remember is wiping the tears from your eyes, uploading your photos to social media with #storycity and #mutantroaches.

You’re determined that Penny’s sacrifice won’t be in vain.