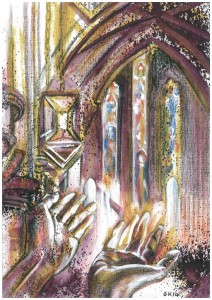 The bells are ringing at St Stephen’s Cathedral, though they never ring at this time of day.

Down this end of the city, things are normal. As far as you can tell, there are no bugs. But traffic is starting to build up along Elizabeth Street and from the city, you hear automatic weapons firing.

Suddenly, a massive eight-wheeled armoured personnel carrier goes roaring past, shattering the illusion of normalcy. It swerves across the road, wiping out a row of parked cars, then continues up the road, towards the Hilton Hotel.

You run across the road and into the church. For one horrifying moment you’re blind, hands held out in front of you, waiting to feel spindly legs in your hair. Then you pass through the antechamber. Your eyes adjust to the gloom and you see light streaming through beautiful stained glass windows.

Jamieson’s mates are at the back of the church, grouped together. Old clothes, ratty beards, and tired eyes greet you. People you’ve seen all over Brisbane for years, but never in the one place.

You walk over to them.“I… Jamieson sent me…”

A man wearing an old Brisbane Broncos jersey and worn-out jeans steps forward. “Is he okay?”

“Yeah, he… He was fine when I left him. He said you were leaving the city, across the river?”

The man shakes his head. There’s fear in his eyes. “We just came from there. Those things, they’re attacking anything that moves – ferries, yachts, swimmers. It’s as though they’re trying to stop people leaving.”

The bell tolls above you.

“We’ve been trying to decide what to do next. We think we can cut across the city, get out through Central Train Station.”

A woman steps forward, voice harsh. “Don’t listen to them, you’ll never make it. Come with me. We’re going to Post Office Square car park. We’re going to boost a car from the garage.”

Shrine of Remembrance: Trust the public transport system is still running and try for Central? Turn back the way you came along Elizabeth Street. Turn right into the alleyway where the Australia Post sign is. Cross Post Office Square, taking the stairs to Adelaide St. Look for the bin on Adelaide Street, on the opposite side of the road from Anzac Square.

General Post Office Alley: Go with the woman to Post Office Square? Turn back the way you came along Elizabeth Street. Turn right into the alleyway where the Australia Post sign is. Look for the bins at the other end of the alleyway, outside the GPO near the Zebra crossing.