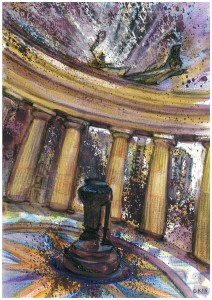 Glancing at the clock tower above Central Train Station, you can’t believe Brisbane has been transformed into hell on Earth in such a short span of time. The sandstone Shrine overlooks a scene of utter destruction in Anzac Square, and Post Office Square beyond it.

There are hundreds of roaches in the air, not bothering to hide themselves. Still more hover in your peripheral vision, and your head jerks back and forth, looking for the tell-tale shimmering of a cloaked bug.

To be honest, you’re lucky to have made it this far. Taking the alleyway seemed like a good move. The walls stretching high on either side offered protection, right? There were bugs, sure. But most flew over the alleyway.

About halfway along, you sensed something wrong. There was a sound, like paper rustling, and it spread, shimmering along the walls which then moved. You blinked, unable to comprehend. Then the roaches dropped their camouflage, and you realised they were all around you.

They swarmed. There were screams. You ran, head protected between your hands.

Only three of you made it through. You bid farewell to the woman at the GPO. The man you’re with scavenged a shotgun from an abandoned police car, and then you skirted around the back of the soldiers fighting bugs in Post Office Square.

You only made it across Anzac Square because of the shotgun. But by the time you made it up the sandstone steps, the man had used up all the ammo.

He man stands next to you, panting.

Across the road, hundreds of people are crammed into Central Station, shouting, screaming, and pushing each other.

“We’ll wait until the crush clears,” the man says.

A sudden scuttling sound comes from across the road. The tenor of the screams changes from anger to outright terror. You feel it coming, like a dark tide, but don’t believe it until you see it. Hundreds of roaches surge from Central Station, latching onto people or bursting into the sky.

The main tide washes past you, heading for Post Office Square, but a few attack your group.

You run, but one of the cockroaches easily latches onto your back. You can feel its feeding tube probing the back of your skull, looking for your eye socket.

You turn, running backwards into the columns surrounding the Shrine. You smash back again, once, twice, three times. But still it hangs on.

It scurries around you, clawed feet scrapping across your skin, trying to get onto your face. Its proboscis, dripping with acid, darts for your eye but you twist, and it lands in your hair instead. You can smell burning hair. You remember Jamieson, with his flamethrower. You know what you have to do. You leap the low barrier, run forward and launch yourself onto the flame, driving the bug ahead of you.

Crying out as flames lick the side of your face, you hold the bug down by the neck until you hear the crackle of its wings and antenna burning. Acrid smoke, stinking of burning garbage, stings your eyes.

You fall, exhausted, against the ground. As the world fades, you hear a massive crack rent the air.

When you open your eyes, you’re on a stretcher. There’s a whomping noise, which you think is in your head. But then the Black Hawk helicopter banks, and you see the burning city below you.

Remembering what Jamieson told you about photos of roaches and roach dens, you pull out your phone and upload the last of your images, tagging them #storycity and #mutantroach.