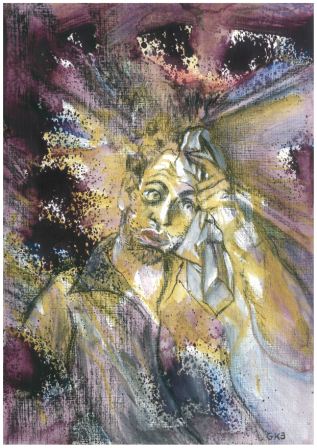 You find the man rolling around on the ground, the giant cockroach still clinging to his back. The bug is shaking its wings as a proboscis searches the man’s face.

You kick the bug’s head and it hisses at you. Then it disappears. You rub your eyes. You can still hear it, but you can’t see it. All you can see is a slight rippling across the man’s back.

You kick again, aiming for the rippling space, and with a jerk the roach skids down the road, flickering into view again.

The man rolls away from it. For an eternity, the bug stands its ground, antennae twitching back and forth. But then it scuttles under a nearby doorway.

You help the man to his feet. His clothes are covered in dust, but they don’t look like they were in great condition to begin with. His cheeks are covered in stubble, and dark circles ring his eyes. He offers his hand. “Jamieson.”

Wisps of smoke rise from his head, and you can smell burning hair. When you point this out, he takes a grotty handkerchief from his pocket and wipes his hair, then throws the fabric on the ground.

“Acid. They use acid to break down their food source, which happens to be human brains,” he says.

You gape at him. “We need to tell someone.”

In the distance you hear sirens and people screaming.

“Too late for that. We did try, but they didn’t believe us.” Then he laughs. “Well, to be fair, would you, if you hadn’t seen it for yourself.” He turns and takes in the artwork. It’s dedicated to James Charles Burnett, one of Queensland’s earliest surveyors. Another part tells you that Burnett Lane was the city’s first laneway. “Yep, the writing is on the wall. A hundred and ninety years this city has been here… and we’ll be damned if we surrender it to those abominations.”

He takes a key from his pocket, walks across the alleyway and slots it into a padlock and then pulls open the mesh gate, rifling around in the small alcove.”We’ve been preparing, hiding our supplies.”

He pulls out something that looks like a backpack weed sprayer. You get a waft of petrol fumes as he straps the pack on his back and brandishes the hand-held nozzle. He fiddles with the controls.

“I need your help. We need to catalogue any place these bugs are hiding, or likely to be hiding. I’m not talking about bins or dirty, scummy city corners – these aren’t ordinary cockroaches. They’re a different breed that don’t like dirty. These super-roaches like interesting hidey-holes and alleyways, with textures and patterns that accentuate their ability to cloak themselves like a chameleon.

“If you see possible roach hiding places, or anything that could be a super-bug in camouflage mode, take a photo and upload it to social media using the tags #streetreads14 and #mutantroach. We’ve got believers in a safe location who are monitoring the feed, accumulating the data for when we fight back.”

You hit the deck as he squeezes the trigger. Flames leap over your head, singeing your hair. You roll over and see the giant cockroach writhing in flames, its wings, antennae and legs turning to ash.

“Glad that worked,” he says.

“Don’t suppose you’ve got one of those for me?” you ask.

“Sorry. It was hard enough finding this one. You should stick with me. I need to canvas the Hilton Hotel at the back of the Wintergarden. Dave – he’s our leader – is a structural engineer. He reckons we can pump gas from the pipes under the hotel, into the stormwater drains, and burn the roaches’ out into the open.

“Dave reckons they’ve got a hive-mind thing going on. You can kill ‘em one-on-one, but once they swarm – game over, man. Dave reckons the hive is under the city, and if we can take that out…I understand if you just want to get out of here. My friends thought the same. The plan was to rally inside St Stephen’s Cathedral. From there they’re going to try and get on a ferry over the river.”

St Stephen’s Cathedral: Accept your lack of weapons and try to escape the city? Go to bin on the opposite side of the road from St Stephen’s Cathedral on Elizabeth Street. While you‘re escaping, don’t forget to take photos of potential nests to help Jamieson rid the city of these beasts.

Hilton Hotel: Stick with Jamieson and go into battle? Go to the bin next to the Hilton Hotel on Elizabeth Street.