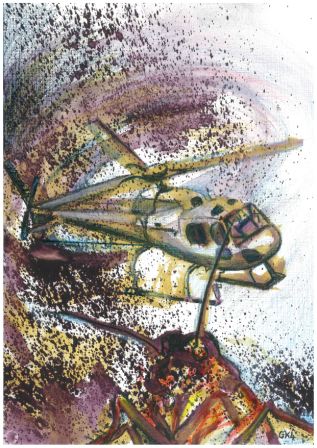 The press of the crowd drives you onto Tank Street. You pause by the bins to catch your breath. A helicopter thunders overhead.

A roach crawls out from under the bin and you slam it with your foot. The crunch has never been so satisfying. But you know it’s not alone, you can hear other bugs flitting through the sky and scurrying across buildings, even though you can’t see them.

Crowds of people surge around you, heading for the bridge. Between the buildings you can see the dark forms of the bugs soaring through the sky.

Penny pulls the documents out of her bag again and stands in an alcove, away from the crush. A man runs out of the building, tripping over her and scattering the documents. You both frantically scramble to pick them up.

“What are you doing?” you say.

“Looking for information that will help us. These things aren’t some natural mutation. They’re a creation. Blackwing created them as an area denial weapon. A weapon designed to keep people out – or in – a particular area.

“The fact that they’ve emerged means they’ve reached activation size. We could already be too late. But we have to try getting out. Right now. Otherwise we’ll be stuck here until the nest is destroyed. That is if we don’t become food.”

From the centre of the city comes a loud explosion, thrumming through the ground.

“Okay, which way do you want? Kurilpa Bridge or the Transit Centre?” Penny says.

Thousands of people are streaming along George Street, and most headed for the Transit Centre. But an equal number are trying to get across the bridge, moving at a snail’s pace.

“If the trains at the Transit Centre are still running and we get on one, we’ll be home and hosed,” you say. “That’s taking a big risk though. The bridge is closer, but we’ll be exposed all the way across. If what you say is true, those roaches aren’t going to want to let us leave.”

Lady Justice Statue: Decide to try for the Transit Centre? Go back to George Street, cross the road, and continue up George Street until you see the Statue of Justice on your right.

Kurilpa Bridge: Decide to take the bridge? Continue down Tank Street onto Kurilpa Bridge until you reach the end of the mesh railing.