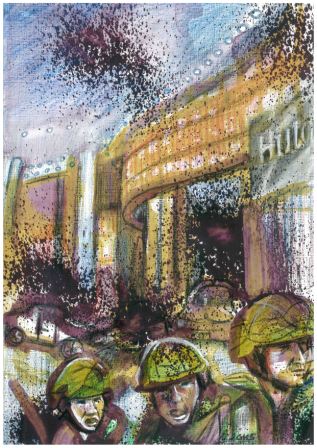 By the time you reach the Hilton Hotel, Elizabeth Street is a war zone.

The road is packed with cars but none of them are going anywhere. Some drivers are laying on their horns, and terrified people stream around the cars, but no-one seems to know which way to go.

You do a double-take when you see the soldiers. Kevlar helmets, urban camouflage fatigues, brandishing automatic weapons. They’re fanned out across the street, using the cars for cover, yelling to each other and firing up at the hotel.

Following their line of fire, you realise why they’re so panicked. The super-roaches are scuttling across the surface of the hotel, flickering in and out of view as their chameleon camouflage kicks in. You squint at the hotel, straining to see the tell-tale shimmer that you noticed in Burnett Lane. Rounds pound the wall, shattering the tiles but mostly missing the bugs.

You hear the rustle of wings and cry out. Jamieson turns and screams. Flames spew from the nozzle and heat brushes your cheek. The roach, now on fire, drops to the ground in front of you, hissing in fury as it dies. Smoke washes over you stinking of burning garbage.

You look to your left and see a soldier screaming on a top of a car. He drops his weapon and is struggling to pull something off his face. There’s one final scream, then a liquid sucking sound. You catch a glimpse of a dark hole where one of his eyes used to be, before he falls off the car, out of sight. The roach flickers into view, takes off, and turns invisible again.

Jamieson pulls you down beside a maxi taxi.

“Notice anything odd about these soldiers?” Jamieson yells. A man barrels past you. “No insignia. No flags, no name tags, no badges of rank. They’re civilian contractors. How the hell did they get here?”

From the end of the street comes the blast of an air horn.

You follow the sound to see an eight-wheeled armoured personnel carrier careening down the street, crushing cars, its driver unperturbed by the pedestrians frantically trying to get out of its path.

You dive onto the pavement on the other side of the road as the vehicle powers past you. It slams into the hotel and smashes through the plate glass windows. The impact sets off car alarms up and down the street, adding to the cacophony. The noise only draws more bugs.

The hatch on top of the carrier clangs open and a soldier clambers out, screaming. He’s followed by three giant roaches.

Jamieson leaps over the cars, aims, and lets loose. The three roaches go up in smoke, and the soldier manages to crawl to relative safety inside the hotel.

You look to your left. Behind a car there’s a civilian contractor crouched down, his face covered in camouflage paint and a big, bushy beard. He shuffles over, as Jamieson returns.

“Your mate’s pretty handy with that thing,” he says. “Paul Proud. Mates call me Proudie.”

You scan his fatigues but it’s like Jamieson said: no name tag, no badges. Just a battle harness loaded with ammo.

“We’ve got an evac chopper coming in,” he says. “We’d be happy to take you two with us.”

Jamieson shakes his head. “I can’t. I need to get into the Wintergarden basement. Check out some stuff.”

Paul laughs. “Place is thick with those things. You won’t last five minutes, even with that flamethrower of yours.”

Jamieson groans. “I better get back to our base then, fill Dave in on the latest.” He pulls you to one side. “Listen, I’ve got a bug-proof place we can ride this out if you trust me. Come with me. We can wait it out, then come out fighting.”

You give him an uncertain look.

“No hard feelings if you try to evacuate,” he says. “But make sure you keep taking photos of likely bug activity, and upload them with the #streetreads14 and #mutantroach tags.”

Proudie looks at you. “Well?”

Pancake Manor: Stick with Jamieson? Walk back towards Reddacliff Place, turn left onto Albert Street, then right onto Charlotte Street until you get to the bin outside Pancake Manor.

Post Office Square: Go with Proudie and try and escape the city? Continue down Elizabeth Street, turn left onto Edward Street, right onto Queen Street. When you reach Post Office Square turn left into the square and look for the wall-mounted statue of a torso.