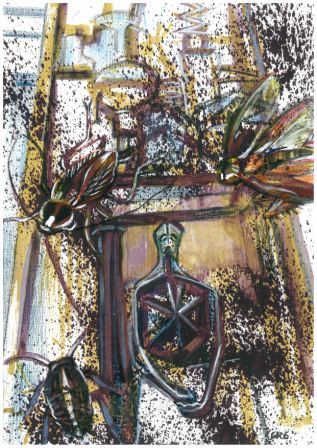 Proudie stops under the statue of the torso and his men fan out around him, covering the grass expanse of Post Office Square. All of them have assault rifles.

The air is filled with the sound of beating, papery wings and claws scuttling across the faces of the buildings. Occasionally you see something moving out of the corner of your eye but when you turn to look, it’s gone. In the sky you can see roaches gathering above the city, but you know there are others hovering closer to the ground. You just can’t see them. You can’t help but twitch and your heart feels like it’s going to leap into your mouth.

The soldiers are taking pot shots but either they’re missing, or the bullets are having little effect.

“Are you mercenaries?” you ask.

“I prefer the term soldier of fortune.”

“Did you know this was going to happen?”

He grins. “Let’s just say I’ve got a habit of being in the right place at the right time. Down!”

He pushes you down and opens fire so close to your head that your ears are ringing. When you look up, there’s a dead bug on the pathway. But it seems there are more of them on the buildings now, drawn by the weapons noise.

“Why are you trying to save me?”

Proudie swaps out a mag from his assault rifle, takes a new one from his webbing, and slaps it home.

“A little bird tells me you’ve been uploading photos of this little SNAFU. My, ah, employers are keen to have a chat with you about that.”

You look around for Jamieson, but he’s long-gone.

“Where’s our damn chopper?” Proudie yells. “Irwin, get onto them!”

A nearby soldier, with a long antenna sprouting from his backpack, mutters into a handset. You shudder, it reminds you too much of your first sighting

In under a minute a helicopter gunship is hovering over the square, blades whirling, throwing up debris. The sound of its massive engines reverberates off the buildings. The mini-gun on its nose spits fire. But again, the bugs just melt around, and reappear. You see one clinging to the helicopter’s windscreen. The side door opens, and a hand emerges, clutching a pistol. It fires off several rounds, obliterating the bug.

But more of the roaches have arrived, and they’re on the ground, as though trying to stop the helicopter from landing.

Proudie groans in frustration. “It’s no good. We need… hmmm, what’s that made of?” he asks, gesturing to the wall artwork.

A soldier runs up to him. “Get some high explosive RDX and a detonator behind that thing. We’re gonna turn that statue into a massive Claymore mine. Irwin, make sure the chopper clears out before this thing goes off. Guys, cover me.”

Proudie sprints away from the statue, out into the middle of the square, spraying rounds at the bugs that have taken up residence there. The roaches take flight, drawn by the sound. You can see hundreds, which means there’s probably thousands. At any moment they could descend on you all.

Your instinct is to run, rather than be turned over to his ‘employers’. But his men are all around you, and around them the city is in chaos. You hiss in frustration, then chase after Proudie.

The mercenary glances across at Carpenter, who has hopped down and is running away. Then he looks up at the helicopter, still hovering there. You look around for Irwin, who is lying on the ground, covered in feasting bugs.

He pushes you down a curved flight of stairs in the middle of the park, crouches down beside you. The bugs take off and go after you.

Then the bomb goes off. It turns the statue into molten shrapnel, which rips through the cloud of bugs, tearing them apart. Dead, smoking roaches drop from the sky.

Proudie looks up, and grins, crazier than ever. His beard is smoking.

But the grin fades when he sees the gunship, fire blazing from its cockpit, tail rotor gone, spinning uncontrollably above you. For a moment you think it is going to crush you all, then it veers away and smashes into the GPO across the road, exploding.

Proudie sprints to Irwin, rolls what’s left of him over, and grabs the handset.

You’re expecting the noise of the crash to draw more roaches, but the air is strangely still. You remember what Jamieson told you about hive mind, and wonder whether the blast killed enough to cause some sort of black spot in the bugs’ omni-vision.

You glance over to Proudie, who is stretching a bodybag over his dead comrade. Now’s your chance to upload any last-minute photos to social media. Don’t forget to tag them #storycity and #mutantroach. If you escape the city, and survive your ‘debriefing’, you could win a prize for taking part in this crazy adventure.

Proudie returns and you huddle together in the middle of the square, watching the post office burn. Smoke billows into the air.

Eventually, a Black Hawk hovers over you.

“Get to the chopper!” Proudie yells.

You sprint to its side and dive in.