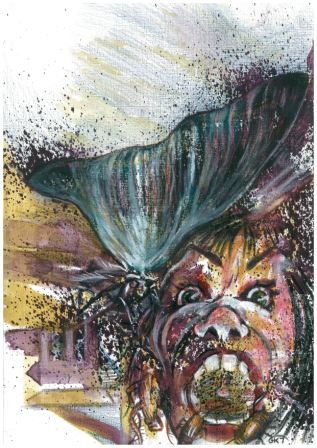 You pause for breath in the shade of the overpass. Overhead you hear the angry beeps of cars choking the road out of the city. You look up at the strange sculpture hanging above your heads.

“There it is,” you say, pointing to the sculpture.

“Sheesh,” Penny says. “It really is. Quick – take photos, post them with the tag #streetreads14 and #mutantroach. My colleagues need to know someone is intentionally breeding these monsters.”

She puts down her bag and pulls out the documents, comparing the sculpture to the photo. Hundreds of people are streaming past, heading out of the city centre any way they can. Further down the road, a military Bushmaster four-wheel-drive is trying to bully its way through the traffic. The heavy machine gunner on the roof swivels in his turret, letting loose some rounds at a flying bug. He misses.

You get closer to the sculpture, taking photos from various angles. Above the din, you hear a metallic rattling noise. At first you think it’s coming from the road above your head. You turn. Penny is on her knees, scanning the text under the photo.

“You don’t want to get too close to that thing,” she says.

Movement catches your eye. You look up at the sculpture. There’s another rattling noise, and this time there’s no mistake about where it’s coming from.

The reporter looks up as bugs stream out of the sculpture. These are smaller than the ones you saw earlier, but no less aggressive. They swarm Penny, who tries to get the documents back in her pack. Bugs cover her back, their proboscises searching for flesh, making the fabric of her jacket smoulder wherever they touch.

You try to swat them off. She drops and rolls. You hear a sickening crunch and when she gets back on her feet dozens of dead bugs drop to the ground. More stagger away, and you crunch them under your shoe.

The Bushmaster has seen the commotion, and drives onto the footpath, sending terrified citizens scattering. A machine gun opens fire, rounds droning above your head. Soldiers pour out of the vehicle, using other cars for cover.

The baby roaches, seemingly drawn by the noise, converge on the soldiers. The troops retaliate but while their aim is good, the rounds seem to do little. Then the bugs disappear, turning from a cloud of brown into a virtually invisible shimmering in the air.

Penny screams and collapses. Blood pulses between the fingers she holds to her leg. You look around frantically for a bug, then realise she’s been shot.

You rummage in her bag, find an old cardigan, and use it to bandage the wound. But before you’re done it’s soaked red. And while you can’t see anymore roaches, you can still hear them buzzing through the air, hunting for victims. You try to make as little noise as possible, hoping they’ll be attracted by the whine of the guns and cry of the soldiers.

You look up and down Roma Street. The sky above the CBD is thick with flying roaches. And those are just the ones you can see.

“I’m not getting out of the city with that swarm,” you whisper. “Look, there’s a Dental Hospital on Turbot Street. It doesn’t look too bad, they might be able to fix you up.”

Penny closes her eyes. “Right, you can’t get out of the city now. So you need somewhere to lie low instead.”

“It’s been nagging me since I got here. Something I read years ago. There’s some golden statues somewhere in Brisbane, right?”

“One of them isn’t a statue. It’s an access point.”

“During World War Two there was a bunker under there. They decommissioned it after the war, but the theory was, the Queensland Government would use it in the event of nuclear war.”

“Which statue is it?”

“I don’t know. But you’ll probably find one has a handle or a lock or something.”

You stare down at Penny who is sitting in a rapidly growing pool of blood, then around you. “I’ll have to go past the Dental Hospital anyway. We can both go.”

She shakes her head. “I’ll slow you down. Take the documents. Get into that bunker and wait until the cavalry arrives.”

348 Edward Street: Decide Penny is right, and you’ve got more chance of success by yourself? Then cross the road, go up the flight of stairs onto Turbot Street, and continue until you see the golden statues on the right, at 348 Edward St.