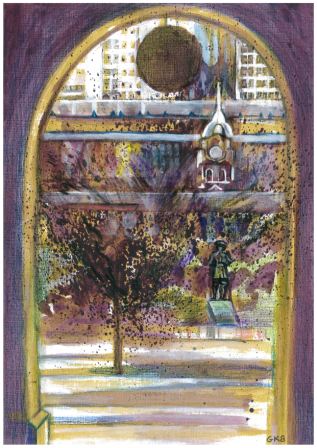 You emerge from the archway outside the General Post Office alley, gasping for breath. You turn around and assess the damage. The woman is still with you, although she has a burn mark on her cheek from where one of the roaches burst apart on her face. The man who wanted to head to Central survived. The rest who chose to come with you are dead.

“Good luck,” the man says, then heads off across the road.

In the Square, soldiers are locked in battle, with a largely invisible foe. Then a helicopter joins the melee, the mini-gun on its nose spraying the square with heavy machine gun rounds.

You try to process what just happened. Taking the alleyway felt like a good move. The walls stretching high on either side seemed to offer protection. The thin strip of sky over your heads seemed a long way away. There were bugs, sure. But most flew over the alleyway.

About halfway along, you sensed something was wrong. There was a sound, like paper rustling, and it spread, shimmering along the walls. The walls seemed to move. You blinked, unable to comprehend. Then the roaches dropped their camouflage, and you realised they were all around you.

They swarmed. There were screams. You ran, head protected between your hands. It was a miracle you survived.

“Come on,” the woman says, heading for the car park entrance.

“Hang on,” you say. You remember Jamieson’s plea to upload photos of suspected roaches or roach hideouts. You take a few moments to upload your photos, remembering to add the #storycity and #mutantroach tags. If you survive this, maybe your photos will win a prize or something.

In the square, there’s a massive explosion. It rocks the ground beneath your feet, so strongly you lose your balance. Windows shatter. Where there was a cloud of shimmering bugs, now there is only smoke and charred carcasses.

There’s a mechanical roaring sound, metal screaming on metal, and the helicopter lurches fire blooming in the cockpit. It staggers through the sky, closing the distance between you at a frightening pace. It’s lost its tail rotor and spins, out of control.

You look frantically around you for cover.

“Back to the archway!” shouts the woman.

You turn and run. Just as you reach it the helicopter gunship swings in your direction and hits the arch, engulfing you and your comrade in a massive, deadly explosion.