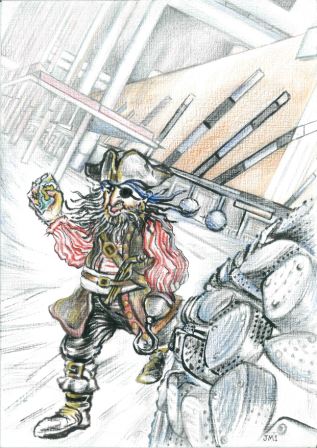 The treasure map seems so small now you’re finally holding it – tiny for such an important thing. It’s going to make you rich, but it fits in your pocket.

You borrowed it from the library, although admittedly you borrowed it in the same sense that you “borrow” money from people you rob at swordpoint. You’re a pirate, you don’t bother paying library late fees. You’re not just any pirate, though: you’re a pirate Captain, with your ship The Sea Cat docked on the Brisbane River. The first mate and a skeleton crew are currently on board – they’re a skeleton crew in the sense that there aren’t many of them, not that they’re actual skeletons. You tried that once and although you save on food they just blow away in a strong wind.

You’ll need more than a bare-minimum crew to chase this particular treasure. Fortunately, you’re in Brisbane and although most people don’t know it Brisbane is a wretched hive of scum and villainy full of pirates if you only know where to look. And you know where to look.

But just as you’re preparing to head off, you see another pirate emerge from the library. It’s your hated rival, Captain Neckbeard, and he’s holding a piece of paper that looks suspiciously like your map.

“Ahoy there!” he says. “What an amazing coincidence it be that before you took that map I made this here photocopy.”

That’s Captain Neckbeard for you. He’s always been a copier – he even named his ship The Sea Dog after your Sea Cat, and he makes a habit of rounding up your former shipmates to join his crew.

“The thing about this photocopy,” he continues, “Is it’s perfectly legal. Unlike your map, which someone has just informed the librarians you stole.”

At this, a gang of Brisbane’s fiercest librarians emerge from the building armed with stationery and hardback copies of The Art of War. They’re going to make you pay for stealing that map, and quite possibly for your $63.50 in unpaid late fees. Good thing the map fits in your pocket, you’ll need to move fast to escape.

You’ll have to round up the crew you need before Captain Neckbeard gets to them, the unscrupulous dog! And collect any gear you need as well. Once you’re at sea you’ll be able to whistle up enough wind to outpace him – it’s a gift of yours – but time is of the essence here on land if you’re to beat him at recruiting Brisbane’s best pirates.

Where do you escape to?

Burnett Lane: Burnett Lane off George Street, where you’ll be able to hide from the librarians and begin your search for Brisbane’s best supplies. (Look for the bin near the Burnett Lane sign.)

Queensland Museum Garden: The Queensland Museum, where the Kraken who lives atop the building might protect you from irate, book wielding archivists. (Look for the bin on the grass in the forecourt, right underneath the giant squid.)

One more thing. As all pirates know, a fierce crew is worthless unless they’re flying under a flag that will strike fear into the hearts of your enemies. During your scouting mission you’ll have to take photos with your phone to create a most fearsome one for your crew – maybe some photos of street art, a cool poster, a big ugly selfie, or interesting things you see on your adventure – and put it on social media with the hashtags #storycity and #pirateslife. The more photos you upload, the more likely you are to win the great pirate treasure!