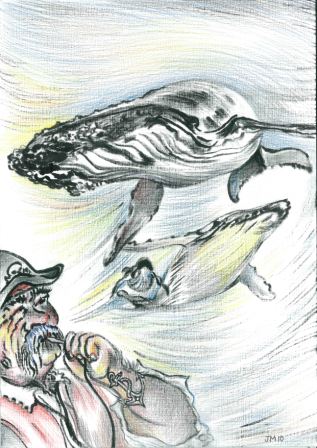 You hear the bosun before you see him. His deep voice echoes up to the whales and down again, singing a sea shanty you recognise called ‘Lowlands Low’. A family with young children walk past, only the kids paying any attention to the old man hollering up at the whales.

The song’s a halyard shanty with a rhythm perfect for singing while you haul the sails aloft. Most of a bosun’s job is to supervise the crew on deck, and leading them in song is how Bosun Richards does it.

“The monkey wears a soldier’s clothes,

Where he got ’em from, God only knows.

Our skipper comes from Barbados,

He’s got the name of Hammer Toes,

He feeds us bread as hard as brass,

Tastes salty as a sailor’s –”

You choose that moment to interrupt Bosun Richards, and save the passing children from learning a scandalous new phrase to try in the playground.

“You can hardly be called a sailor while you’re ashore.”

“That’s true enough,” he says. “Here I’m just a crusty old man who knows a lot of crusty old songs. Do you know ‘Good Ship Venus’? I’ll sing it for you, if you like.”

You think of a word that rhymes with “Venus” and decide against it. “I’m considering setting sail soon. Possibly.”

“It would be bad luck to sail without a bosun,” says Richards. “Especially a bosun who knows sea shanties.”

“Are they valuable though? I don’t think so, I thought they were a bunch of rhymes to keep the crew’s minds occupied while they work.”

“Not valuable? Shanties are full of wisdom! If it weren’t for ‘What Do We Do With A Drunken Sailor’ how would anyone know what to do with a drunken sailor?”

You concede the point. “There’s room for a bosun fine as Richards on The Sea Cat any time…”

“Is there? Well, I could be interested… Hypothetically speaking. Possibly.”

Then he raises his voice and hollers a final verse:

“It’s up aloft that yard must go,

Up aloft from down below.

Lowlands, me boys, and up she goes,

Get changed, me boys, for your sailing clothes.”

You breathe a sigh of relief, thank the Kraken that’s settled and Neckbeard missed Bosun Richard’s hollering. You’re one step closer to setting sail. Across the bridge in the city you’ll find more crew and equipment, but best be quick. There might be more librarians hunting for you, and Neckbeard’s out there rounding up his own crew and gear.

Magistrates Court: Cross Kurilpa Bridge to Magistrates Court on George Street? Pirates may not like courtrooms most of the time, but they’re a fine place to find scoundrels who’ve been dragged there for trial and may be amenable to the idea of a quick trip far away. You bet you’ll get better scoundrels for your crew there than Neckbeard the sea pig!

The White Store: Cross Kurilpa Bridge to The White Store on George Street, where you can get a spare set of sails you’re likely to need for the journey in case anything happens to the ones you’ve got? Neckbeard is notorious for shooting cannon balls through those vital pieces of fabric, you need to be prepared.