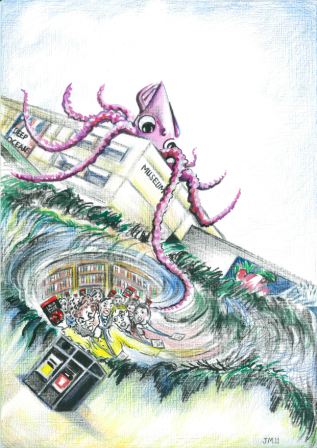 The Kraken is a demigod of the seas responsible for all the mysteries of seafaring: whirlpools, thunderstorms from clear skies, the inexplicable absences of wind called the doldrums, timeholes that transport pirates to the modern day, the whole lot. As an apology for subjecting you to the last one, it taught you how to whistle a tune that summons wind when you need it. Which is nice. It doesn’t exactly make up for never seeing your family or the century you were born in again, but still.

The Kraken, for reasons of its own, has chosen a perch on top of the Queensland Museum in Brisbane, leisurely draping its tentacles over the edge.

You race into the museum’s forecourt, a posse of librarians – a whole conjunction of them – hot on your heels. They’re moments behind you, but moments are all you need. You kneel at the base of the museum and cast your eyes up to the Kraken, praying for strong winds, calm seas, and protection from librarian law.

Feeling pretty silly, you look up at the huge pink squid (why did it choose to be pink, of all colours?). Will the Kraken reach down one of its tentacles and deliver you from death by stapler?

But it will open a timehole that swallows the librarians – the whole shelf of them. You turn just in time to see the glowing portal blink shut. Maybe they’ve gone somewhere historically interesting? Maybe before the invention of books? Who knows? The Kraken is an enigmatic demigod.

You look up and think you see a brief narrowing of its eyes and the twitch of a tentacle.

But as you stand you hear a strangely familiar clacking noise and duck down again. Out on the street, you see Captain Neckbeard hustling past with some of his crew – that clacking noise is their bones. He’s stolen your old skeletal crew, fished them out of the water and made them his own; the copycat.

You remain hidden as Neckbeard and the skeletons pass. They’re heading west, but not making great speed. Dead men don’t walk fast. You can probably beat them to wherever they’re headed, and maybe beat Neckbeard to whichever crewmembers he’s after. If you’re quick.

Whale Mall: Head to the end of the Whale Mall that connects the Queensland Museum to the state Library in search of a bosun who can supervise your crew?

Kurilpa Bridge BBQ Area: Head past that to the barbecue area at the base of Kurilpa Bridge, where pirates have been known to have the occasional drink or three?