Did you accidentally trigger the wrong location? Never fear, if you’ve decided to recruit pirates at the Magistrate Court, click here for JM13. 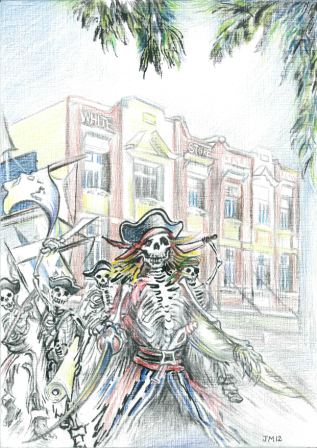 The White Store of McDonnell & East Ltd sells all the canvas and cloth a ship’s captain could need. The boring part of piracy is that you can’t simply rob every person because sometimes you need things from them again in the future. For example, the next time your sails are shredded by Neckbeard’s grapeshot or there’s a hole in your sleeve. So you purchase all the necessaries and pay extra to have them delivered to The Sea Cat immediately.

But when you emerge from the store onto George Street, disaster strikes! Captain Neckbeard has had the exact same idea, only rather than pay for delivery, he’s got his skeletal pirates carrying a complete set of spare sails out of the loading bay and onto the street.

“What a pleasant surprise this be,” says Captain Neckbeard in a voice he must have learnt from watching the Pirates of the Caribbean movies. “You on your own, and me with all me crew.”

“They were my crew first,” you mutter.

“Aye. And then you abandoned them. They’ve got a bit of a grudge. I might just let you sort it out.”

The skeletal pirates clack their jaws. Cutlasses and braces of pistols hang from their hip bones.

Against the whole group, easily a dozen skeletons, you’d have no hope. Fortunately, two things are on your side. Skeletons, having nought but air in their skulls, are quite dumb. And secondly, they’re holding those rolled-up sails.

You begin to whistle. Your gift from the Kraken has proved useful when you’re at sea but it’ll serve on land as well. When the wind answers your call it fills the only sails it can find, whipping open the bundles held by the skeletons.

Before Neckbeard realises what’s happening two of the skeletons holding a mizzensail have been swept up into the sky while three more clutching a mainsail are dragged into the road and under a bus.

It’s too late. His crew are scattering up and down the street, collapsing in piles of bones as they bounce off walls and posts.

Neckbeard races towards the skeleton holding the flying jib – the frontmost sail of a ship – ordering it to let go. It does, and the final sail, whipped free from bony fingers, scoops Neckbeard up as it blows away. With a final gust the wind whooshes it upwards, and Neckbeard shrinks in the distance, vanishing into the sky.

As he goes up, a scrap of paper floats down. It’s the copy of your map Neckbeard made. You catch it, and fold it carefully away. Even if Neckbeard manages to get down he’ll never find the treasure now. You’ll have plenty of time to round up the rest of your crew at leisure, and then board The Sea Cat, fill her sails, and skim across the water to that treasure.

All you need is your fearsome pirate flag and you’re set. Remember to take a photo and upload it with the hashtags #storycity and #pirateslife!