Did you accidentally trigger the wrong location? Never fear, if you’ve decided to get supplies from the White Store, click here for JM12. 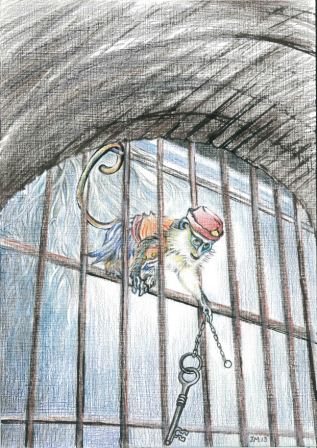 In the old days rounding up a crew was easy. You’d just go to a few dockside taverns and press-gang them. Get sailors drunk enough and when they wake up on a ship in the morning they’ll believe they signed on for it.

You lean against the distinctive sculpture of a wave made from grey toffee outside the Magistrates Court and keep your ears open. Barristers bustle past on their way in and out of the court, wearing wigs that make them look like British naval officers. (Fortunately, they don’t smell like British naval officers.) You’re hoping to hear a few key words about their clients. Theft, robbery, assault. All promising elements in the CV of a pirate.

It’s not long before you hear a barrister on her way to a break with a container of sushi complaining to her colleague. “He’s clearly a pirate,” she says.

This is a stroke of luck.

You see a man who looks suspicious loitering near the entrance. This must be her client. You duck over and give him a nod.

But when you ask what experience he’s got in piracy his answer is confusing.

“I just couldn’t wait till January for season four,” he says. “The internet’s already spoilt half of it.”

This modern age is a confusing time, you think, at a loss for what to do.

Unbeknownst to you, while you’ve been chatting the librarians have set up an ambush. They’re very quiet, librarians. Famous for it. This modern day pirate seems to have been a decoy as well as useless.

The librarians corner you in a classic pincer movement. One group pours out of the court while another spills from a bus on George Street. They attack with a battle cry of “355 to 356! Military science, infantry forces and warfare!” Then a dozen of them are upon you with rulers, compasses, and weaponised bookmarks. You draw your cutlass and lay about you, but the blade’s immediately snapped shut between the pages of a copy of Paradoxes of Defence (George Silver, 1599) and then wrenched out of your grasp.

You’re left unarmed as grimacing librarians brandish safety scissors on all sides. Slowly, you raise your hands in surrender.

You’re marched to the library and down to its hidden sub-basement dungeon where you are locked away for the rest of your days.

The treasure map is returned to its rightful place and The Sea Cat never sails under you again. Your story ends here.

You’re sitting in your cell and feeling sorry for yourself when you hear a rattling and see Mr Boots, the monkey, approach with the keys on a chain.

“Dashed hard to find you,” he says. “They’ve gone and filed you under 910.45 (ocean travel and seafaring adventures) rather than 364.164 (violent offences against property). Still, I’ll have you out in a jiffy.”

You make your escape with Mr Boots, promising him a promotion to lieutenant, then on to The Sea Cat to set sail. Adventure awaits

All you need is your fearsome pirate flag and you’re set. Remember to take a photo and upload it with the hashtags #storycity and #pirateslife.