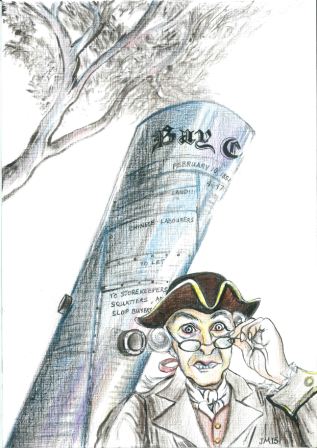 The Courier statue at the top of Charlotte Street looks like a rolled-up newspaper cast in stainless steel to most, but look with a pirate’s eyes and it might be a spyglass.

Mr Thacker, the navigator, certainly sees it that way. He’s an old-fashioned man in many respects, one who still believes in sailing by dead reckoning – starting with a fixed position and then estimating further positions based on speed and trajectory rather than, say, turning on the GPS.

You see Mr Thacker’s wigged head peering through one of the holes in the Courier when you cross the street towards him. You cough into your hand to attract his attention and he peers over his shoulder at you, adjusting a pair of half-moon glasses on his nose.

“Not interested,” he says, then returns to looking through the tiny glass porthole.

“Let me tell you what I’m up to, at least. I’ll make it quick. I don’t have much time anyway.”

“Don’t care,” he says. “Not interested in sailing any more. Even pirates like you use chronometers and your bloody smartphones for everything. No challenge in it. Harder to find your way around Brisbane than the bloody Pacific Ocean now.”

You take out the tiny, precious treasure map and hold it up to him. He turns from The Courier again, moving his glasses back up his nose.

“What’s this? That’s a terrible map. Barely readable. No measurements of longitude. Doesn’t even have a compass rose, just a measure of prevailing winds. You’d be mad trying to follow this.”

“Meet you on the ship,” he says. “I’ll find my own way there.” He has one more look through the glass. “Can’t see a bloody thing in this.”

You breathe a sigh of relief. You’re one step closer to setting sail, but best be quick. There are librarians hunting for you, and Neckbeard’s out there rounding up his own crew and gear.

North Quay: Head to North Quay and get The Sea Cat ready to depart? No more faffing about, the tide is almost upon you!

Queens Park: Decide you’re willing to cut it fine to get one final edge over Neckbeard? Head to Queens Park behind the Treasury Casino, where you can add one final pirate to your crew – one of the most bloodthirsty pirates you know.