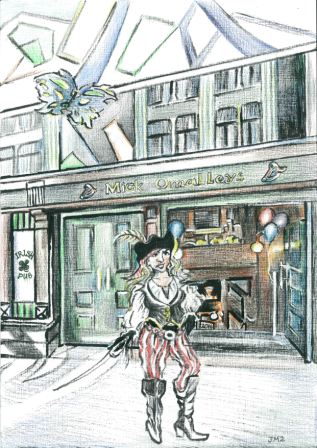 A ship needs rum. There are two reasons for this: one, a crew with a regular allowance are less likely to mutiny and abandon their captain in a boat before they bugger off to Tahiti; two, you can water it down to make it last longer and it’s the best way to stop pirates from getting dehydrated, since it can’t be guaranteed they’ll remember to drink water on its own but it’s a rare pirate who forgets to drink rum.

You hesitate outside the green door of O’Malleys bar. Ornamental butterflies above it lend the place some colour other than green which is a mite overused in this here establishment in your opinion. The glass lift silently rises and falls.

Eventually, you duck through the doors. It’s easy enough to negotiate for a shipment of rum to be delivered to The Sea Cat, but you’ve got a good reason to rush back up the stairs and out into the Mall. It was the last wish of an old friend of yours, Mick, to have his coffin displayed in his favourite bar. His final resting place is a table in O’Malleys near the stairway where patrons can rest their drinks on the glass lid and his preserved face.

You shudder. It’s macabre, even for a pirate.

The fresh air of Queen Street Mall is a relief, but you’ve no time to enjoy it. A young woman in striped pants is waiting for you. She looks familiar.

“Paying your respects to Dad?” she says.

Now you remember. This is Mick’s daughter. You mumble something apologetic.

“You’ve nothing to apologise for. Dad always said you were a good captain. Which is why I want to join your crew.”

“Crew? I’m not putting a crew together,” you lie. You’d rather not be responsible for two deaths in the one family.

“You just ordered thirty barrels of rum. Either you’re setting sail, or you’re planning a twenty-first birthday in Ipswich. Look, I know everything my father knew and I can winch a capstan faster than he could. I’ll see you at the dock.”

Well, you do need the crew. Her father was a capable sailor when he wasn’t dead, or dead drunk. You look back at O’Malleys and silently promise Mick you’ll take good care of her.

The clock in King George Square bongs out the time again. It’s passing too quickly, and you’re keenly aware that Neckbeard is out there recruiting his own pirates. If you’re going to beat him to the treasure you’ll need to sail on the next tide, which means you’ll need to be quick about rounding up the rest of your crew.

There are two scurvy dogs you’ve worked with in the past who can be found on Charlotte Street, which is an infamous hangout for scoundrels – possibly because of the pancakes.

Waterography: Head across the road from the Waterography exhibit at 128 Charlotte Street, to a bin near a tree where the navigator, a man of science, awaits?

The Courier Mail Statue: Head to a bin across the road from The Courier statue at the top of Charlotte Street, not far from the Pancake Manor where the quartermaster, a fearsome fighter, can be found?