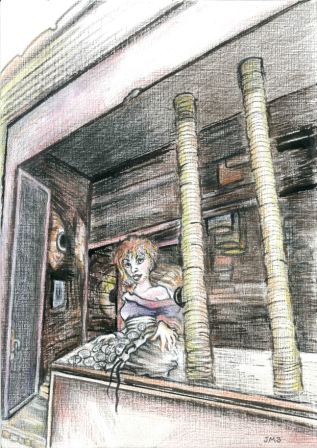 There’s a thick crowd of people on the footpath, all their limbs and backpacks getting in your road. You squeeze between them as if you’re going to pass the entrance to Burnett Lane then duck into it and flatten yourself against the wall. Just in time: a hunting pack of librarians hurries past, hot on your trail. The last one stops right at the entrance, sticks her nose in the air and sniffs twice. Then she adjusts her glasses and moves on.

You’re safe for the moment.

Burnett Lane is named after James Charles Burnett, Brisbane’s first surveyor. Surveyor’s rope is useful on a ship – it’s strong stuff, and good for measuring speed. You drop the weighted end of a rope over the side with knots tied at regular intervals, then count how many knots are pulled past you in a minute. Plus, when rope gets old you can unpick it, mash the threads with tar, and make an effective sealant for leaks.

You can also use it to tie a thing to another thing, of course.

There’s a pub with a silly name that backs onto Burnett Lane with some fancy-looking surveyor’s rope tied taut around its window bars. For a moment you’re tempted to pinch it, but you’re already wanted by the library posse and it wouldn’t do to stir up more trouble. There’s only so many enemies you can make before you dance a hangman’s jig. Another use for rope.

So you enter the bar and haggle with its owner the old-fashioned way: by plonking a purse full of coins down on the counter.

“What are these?” she asks, bemused.

“Are they legal tender?”

“Of course they are! They were Australia’s first official currency,” you say, a fact you’re very proud of knowing.

The bar’s owner looks up exchange rates on her phone, raises her eyebrows, and seals the deal.

You text your first mate and tell her to expect a delivery of new rope. Isn’t modern technology wonderful? Much better than a message in a bottle. The only messages in bottles you’ve found worthwhile are written in rum.

Thinking of rum, you realise you need to pick some up for the journey. It’s essential on a pirate ship. But just as you make your mind up you hear the familiar voice of Captain Neckbeard and find yourself hiding for a second time, ducking back into the bar’s stairwell.

Neckbeard is heading down Burnett Lane, angrily berating one of his crewmates. That crewmate is a skeleton – one of your old skeletal pirates. Neckbeard, the copycat, must have fished your skeleton crew out of the sea after they were blown overboard. He’s yelling at Boney Pete for being a rubbish lookout, which is pretty harsh since he has no eyes.

If Neckbeard’s looking for a lookout the obvious place for him to go is King George Square – there’s one you’ve worked with before who makes her home at the clock tower of City Hall.

City Hall: Race down to Queen Street Mall and across Adelaide Street to the bin in King George Square out front of City Hall, looking for a lookout?

O’Malley’s Pub: Head to the bin next to the information centre in Queen Street mall outside O’Malleys bar, where you can organise a shipment of rum that might lure your potential crew away from Neckbeard? You know he only serves his crew green tea, so what kind of a self-respecting pirate would refuse your offer of a quality drop?