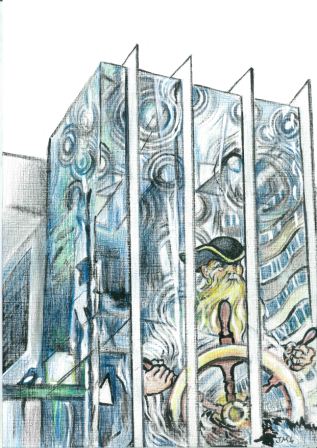 Quartermaster Donaldo is easy to spot. A large man with a blond beard and a tri-corner hat, he leans against a post on Charlotte Street across from the Waterography artwork. You take a spot beside him and look over the street at the sculpture, which resembles ripples and droplets like a heavy summer rain falling in the Pacific Ocean.

“Captain,” Donaldo says, not taking his eyes off the fake water across the street.

You sailed with Donaldo before, seemingly a lifetime ago. He held the helm during storms, and fought like a madman in boarding actions.

”What do you miss about being a quartermaster?” you ask him. “Is it the feeling of a ship’s wheel in your hands, the keel responding to your movements like it’s a tame sea serpent? The solid wood under your feet coming alive as the ship pitches and yaws? The sails filling with wind, stretched taut as drums?”

You blink. “What about the romance of the ocean, the camaraderie of the crew, the smell of salt spray as it hits the railing?”

Donaldo sniffs and rubs at his eye with a fist. “Arrr, I miss shooting people as well.”

You promise him he’ll have plenty of opportunity for both.

You’re one step closer to setting sail, but best be quick. There are librarians still hunting you, and Neckbeard’s out there rounding up his own crew and gear.

North Quay: Head to North Quay and get The Sea Cat ready to depart? No more faffing about, the tide is almost upon you!

Queens Park: Decide you’re willing to cut it fine to get one final edge over Neckbeard? Head to Queens Park behind the Treasury Casino, where you can add one final pirate to your crew – one of the most bloodthirsty pirates you know.