Did you accidentally trigger the wrong location? Never fear, if you’ve decided to get the Sea Cat ready to depart, continue to follow the map to JM8 to continue your chosen adventure. 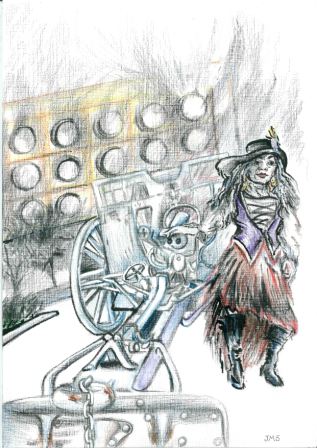 In the corner of the park there’s an artillery piece that hasn’t been fired in decades – at least until now. A shot rings out and when the smoke clears the soot-thick face of Freebooter Kate can be seen. She adjusts her tri-corner hat and points at another perfectly spherical hole she’s blown in the side of the Oaks Casino Towers.

She moves around to the front of the gun to clear the breach, looking over at the statue of Queen Victoria as she does.

“Did you know I used to serve under her? I was in Fat Vicki’s own Royal Navy. Had to dress as a man in those days, of course.”

“I’m putting a crew together. A fearsome band of cutthroats who’ll need a skilled gunner. It will be ten times better than Fat Vicki’s Navy.”

Freebooter Kate frowns, tapping the cannon. “I’d have two conditions. The first is that we see plenty of action. The second is that I can wear a skirt.”

The terms agreed, you cross the park heading towards the river where The Sea Cat waits. You can see her topsails from here, ready to fill with wind. But she’s not the only one waiting for you. Captain Neckbeard waits at the edge of the park, with three of his skeleton pirates.

“Well done gathering a crew,” Neckbeard says, clapping sarcastically. “You were in such a rush to get those scurvy dogs together it seemed like a waste to race you. So instead I think I’ll take them, and your ship. Perhaps I’ll rename her. How does The Sea Dog II sound?”

“You always were a poor man’s copy of me,” you growl.

The skeletal pirates draw their swords.

“Having two captains would be redundant, don’t you think?” he says. “I’m afraid your adventure ends here.”

The dead men advance on you in a group. You could defeat one of them easily enough but even you can’t take on three. One blade to the back and you’d be done for. Still, you’ve no real option. You draw your own cutlass and prepare to sell your life dearly.

A shot rings out! In a flash the three dead men are pulverised into bone dust.

Captain Neckbeard sprints away before she can reload, but it doesn’t matter if he escapes. You’re ready to sail now and even if he dares to follow you’ll have a head start and another chance to open fire on him.

The Sea Cat’s waiting on the river, fully crewed and ready to hunt for treasure and battle – as much of both as she’ll bear.

All you need is your fearsome pirate flag and you’re set. Remember to take a photo and upload it with the hashtags #storycity and #pirateslife.