Did you accidentally trigger the wrong location? Never fear, if you’ve decided to head to O’Malleys to order a shipment of rum to attract crew mates, continue to follow the map to JM2 to continue your chosen adventure. 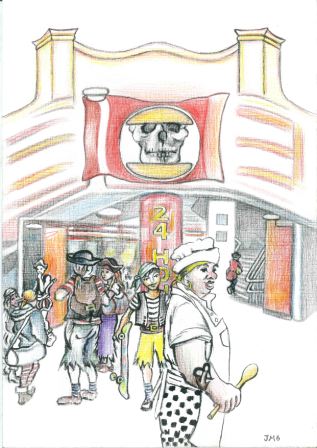 You feel hidden from the librarians among the crowds on Queen Street Mall, keeping a quick pace as you navigate towards Hungry Jack’s. Nobody pays you much attention – Brisbanites never seem to notice pirates in their city. Of course, they don’t much mind the oddball buskers and street artists either.

The top of Hungry Jack’s is pleasingly old-fashioned but below the waterline she’s all red neon and logos. That burger looks like something you saw on Canvas Jack’s flag, only his had a skull between the buns. It was about as appetising.

You stomp past loitering kids and into the family restaurant. The place smells of oil and singed meat; you’re reminded of a galleon you tried to raid loaded with barrels of Greek Fire and market cattle. That was a disaster, but how were you to know the barrels would explode and you’d be left with a cargo of extremely well-done steaks?

The dainty milksop behind the counter doesn’t understand when you ask the simple question, “Where is Hungry Jack?”

But then you catch a glimpse of him by the door and he beckons you outside.

The portly cook sits heavily on a bench between two bins, draping his red coat around himself. “I’m on a 15-minute break,” he says. “Make it quick.”

“Fine. The Sea Cat’s docked nearby and I’ve need of a ship’s cook who can keep a hungry crew satisfied even if some are vegetarians.”

“Months at sea in a leaky boat? You’re not selling me on the idea, Captain.”

You play on his vanity. “A ship’s cook is a senior member of the crew. Would you rather work in a safe family restaurant, or be a respected man at sea? You told me once that back in your own country you used to be a king.”

“All right,” he says, “I’ll sign your terms. But the BBQ Cheese & Bacon is a limited-time offer.”

“The crew will be made aware,” you tell him as you shake hands on the deal.

That’s one important member added to your crew, but you’re keenly aware that Neckbeard is out there recruiting his own pirates. If you’re going to beat him to the treasure you’ll need to sail on the next tide, which means you’ll need to be quick about rounding up more crew.

There are two scurvy dogs you’ve worked with in the past who can be found on Charlotte Street, which is an infamous hangout for scoundrels – possibly because of the pancakes.

But you’ll only have time to acquire one of these pirates. There’s a navigator who can be found at the top end of the street near The Courier sculpture, and a quartermaster who can be found in the other direction, across from the Waterography display. A navigator will help you plot your course, while a quartermaster will help you steer the ship. Which is most essential?

Waterography: Head across the road from the Waterography exhibit at 128 Charlotte Street, to a bin near a tree where the navigator, a man of science, awaits?

The Courier Mail Statue: Head to a bin across the road from The Courier statue at the top of Charlotte Street, not far from the Pancake Manor where the quartermaster, a fearsome fighter, can be found?