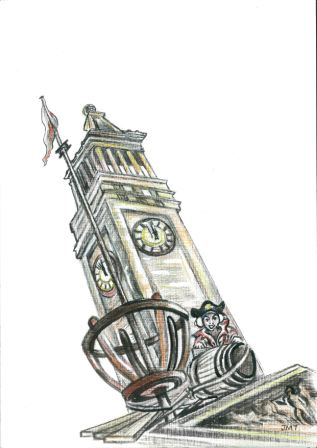 There’s really only one choice for a ship’s lookout in Brisbane, and that’s Ellie-Marie. She loves heights, and when she’s not at sea she moves her crow’s nest around various high places in the city. Well, until someone moves her along. Last time you saw her nest, it was strapped to the side of the Skyneedle, but you heard that Stefan complained and she had to move to her current location.

The flat expanse of cement is like a sea becalmed. It gives you troubling memories of having to drag The Sea Cat into a wind by towing her with the lifeboats, hours of hard rowing while you tried to whistle up a wind before you learnt the Kraken’s trick. You remember your relief when the lookout finally called, “Wind in the sails!”

King George Square is filled with the sound of the chattering TV screen over a cafe, the ringing of a bell as someone speeds past on a bike, and the much louder BONG BONG BONG as the clock tower tolls the time.

As the clock tower bell chimes, the collection of barrels and planks lashed to its side rattles. Standing below in the Square, you wait for the bonging to stop before calling up to Ellie-Marie.

She pops her head over one of the barrels. Huge headphones cover her ears.

“Captain! Want to come up?”

“I’ll stay down here if it’s all the same!” you shout back. “I’m looking for a lookout for a voyage, and you’re the best around!”

Ellie-Marie pops a headphone off one ear. “That’s flattering, but how’s the Wi-Fi situation onboard?”

You sigh, and shout back, “I’ve fixed the problem with the Wi-Fi, and you’ll be able to keep up with Twitter at sea!”

“Yes!” you say, voice growing hoarse, “Of course I’ll have phone chargers on board!” You hold up your own phone as evidence.

“All right,” she calls down. “So long as there’s time between watches to write blog entries!”

Ellie-Marie begins gathering her things and unlash her crow’s nest. It’ll be strapped to the mainmast of The Sea Cat before you set sail.

Feeling satisfied, you turn back towards Adelaide Street and almost collide with Captain Neckbeard. The skeletal pirate accompanying him is grinning; Neckbeard is not.

You shout one last thing to Ellie-Marie: “Verbal contracts are binding!” Then you doff your hat to Neckbeard and quickly cross the road back into Queen Street Mall.

Choose your next destination quickly, before Neckbeard decides to send Boney Pete after you.

Hungry Jack’s: Make a beeline for the head cook at Hungry Jack’s who’d make another useful addition to your crew? Nabbing him would annoy Neckbeard even further and few things please you more than rustling his jimmies. (Look for the bin between the benches outside Hungry Jack’s.)

O’Malley’s Pub: There’s still time to head into the Mall and then turn left towards O’Malleys where you can order that shipment of rum to make doubly sure your proposition is more attractive than Neckbeard’s. Maybe you could poach a crew member or two off him! (Look for the bin past the information centre.)