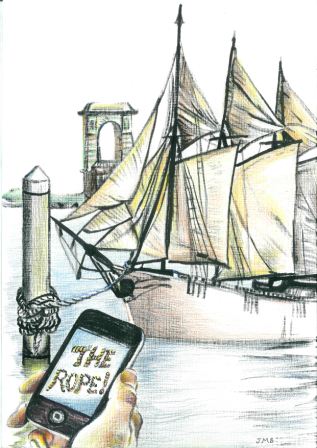 The steady drone of cars on the overpass almost drowns out the lapping of the Brisbane River against the shore. Nothing drowns out the smell, but you can’t have it all.

There she is, at the end of the pier. The Sea Cat, a three-masted schooner with all the mod cons – the crew insisted on Wi-Fi and television – your flag will flying proudly over her once you upload your picture to social media under the hashtag #storycity and #pirateslife so your flag printer can complete the job.

But something’s wrong. Your crew aren’t waiting for you on deck. She’s not tied to the pier and there’s no rowboat to take you out to her. Everything’s too quiet.

Then Captain Neckbeard looks out over the railing of your ship, squinting at you.

“Ahoy there!” he calls. “Got tired of racing you around town trying to beat you to the best crew, so I thought I’d do the smart thing and take them after you rounded them up for me! They were loyal to you, but I’m sure a week in the brig will change their minds.” Neckbeard’s allies, the skeletal pirates who used to be yours, join him in peering over the railing.

“Good work, though! I’ll think of you when the treasure’s in my hands!” Then he laughs and turns his back as The Sea Cat drifts away on the river’s current. There’s nothing you can do. He’s stolen your ship and your crew, and now he’s off to steal your treasure.

But then your phone buzzes. It’s a text from your first mate. All it says is, “THE ROPE”.

Dangling over the side of the ship, you see the strong surveyor’s rope you bought in Burnett Lane. One end is tied to The Sea Cat’s far railing, and the full length of it runs across the deck, over the near side, and onto the water. It was spooled around the pier but now has been untied, the other end floating below your feet. Neckbeard’s a sloppy captain.

Rope has many uses. One of them is to tie a thing to another thing.

You drop your phone, hold your breath and jump into the water, praying you don’t swallow any of the Brisbane River. You push through the water, grab the rope, and then swim back up towards the pier. It’s growing tauter as the ship pulls away, and you’ve only a moment before there’s not enough slack in it for what you’ve got in mind.

You loop it around one of the pier’s columns, tie a quick monkey’s paw knot, then surface, gasping. Treading water, you see the rope pull tight and the ship start to angle, the rope sweeping across the deck as she does. One by one the skeletons are caught on it as the ship spins in the current, then they’re swept overboard by the rope along with Captain Neckbeard.

Meanwhile, you’re monkeying your way along that same rope hand over hand until your feet finally slap onto The Sea Cat. You swing the trapdoor to the brig open and your crew cheer as they climb on deck.

“Thanks for getting her sea-ready!” you call down to Neckbeard, spluttering in the water as you cut the rope.

You can already feel the pull of the tide begin to take you. “Sails down and loose!” you order.

The Sea Cat will take you to your treasure, but more importantly she’ll take you to a life of freedom and do-as-you-please. To be a pirate Captain is to be at the beck and call of no man except the Old Man of the Sea and last time you met you bribed him with rum.