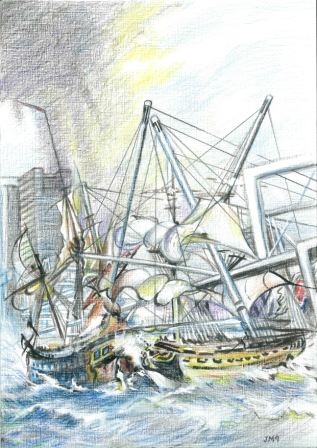 In the right frame of mind the structure of Kurilpa Bridge looks like ship’s rigging that got drunk; it reminds you of two galleons you once saw get hopelessly entwined during a raid. The crew of one filled the other with holes, but couldn’t free their own ship from entanglement before both sunk beneath the waves. Then you swooped in and took all the bounty as it floated up.

You’re so reminded of rigging you could almost imagine a monkey scurrying across. Hold on a minute – that is a monkey! A gold-brown Senegal monkey with white whiskers is clambering above you.

Having a monkey on board a ship is considered good luck, as well as entertainment for the crew. But when you try to call the monkey down it runs away. You pursue it to a barbecue area west of the bridge’s down ramp, slowing as you approach. He’s sitting beside a barbecue plate, gnawing on the remains of a singed leftover sausage.

Although your step is cautious he flinches and dives off the barbecue into the woodchips. Now sausageless, he picks up a discarded cigarette butt to chew on instead.

The poor guy must be surviving on scraps. “On my ship the crew would treat you like a beloved pet,” you say, “they’d feed you beef jerky and tobacco from the pouch.”

In a remarkably refined voice the monkey replies, “Do you mean that about the tobacco?”

You stare at it. “You’re a talking monkey.”

“Yes, yes. How shocking. You do realise you’re dressed as a pirate, I hope.”

“So it’s all right for a monkey to speak but not to speak well? Pure prejudice. Now, I ask you again: did you mean it about the tobacco?”

“Yes. If you join my crew, you’ll have all the tobacco you want.”

“And could I… could I wear a very small hat?”

“You can wear whatever you want.”

“Then we have a deal, and you shall find me at your disposal.” The monkey bows solemnly. “You may call me, Mr Boots.”

That’s settled and you’re one step closer to setting sail. Across the bridge in the city you’ll find more crew and equipment, but best be quick. There might be more librarians hunting for you, and Neckbeard’s out there rounding up his own crew and gear.

Magistrates Court: Cross Kurilpa Bridge to Magistrates Court on George Street? Pirates may not like courtrooms most of the time, but they’re a fine place to find scoundrels who’ve been dragged there for trial and may be amenable to the idea of a quick trip far away. You bet you’ll get better scoundrels for your crew there than Neckbeard the sea pig!

The White Store: Cross Kurilpa Bridge to The White Store on George Street (look for the bin across the road), where you can get a spare set of sails you’re likely to need for the journey in case anything happens to the ones you’ve got? Neckbeard is notorious for shooting cannon balls through those vital pieces of fabric, you need to be prepared.