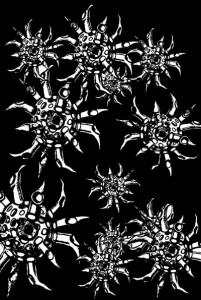 Along the way, you’ve convinced the Best Man of a city wedding to follow you. And you’ve managed to also capture the attention of a few teenagers, with their mobiles, filming everything as they ran backwards from the flesh-eating crazies.

“We’ve got to get into this building!” you shout. This is the building Morgan told you about. The Best Man levers a brick out of the pavement and throws it through the glass. The security alarms blare. Noise. You weren’t supposed to have noise.

You reach in towards the box-like art installation, and rummage through the drawers. There’s a handful of syringes and several vials of vaccine. But this isn’t enough for a city full of healthy people, let alone the people with you.

“Put the vaccine into the Brisbane River,” the best man suggests. “That’s the best way to share it around.”

You shake your head. You’re not drinking Brisbane River’s water, and it would dilute immediately. But there’s no time to think. A swarm of zombies are crossing the road, arms outstretched, coming for you. At the same time, you see the silver stalagmites in the building.

“Weapons,” you say. You wriggle one of the silver poles out of the floor. Just in time. Two zombies stagger through the door. You pierce the first one’s head with the silver artwork. The best man does the same to the second zombie.

“We should take the vaccine,” you say. You slip out a syringe, pierce it through the vial with shaking hands, and stab the syringe into your arm. A cold sensation runs through you. The best man and teenagers step forward to share what’s left.

The fluid pumps through your veins and you feel invincible. The pain in your ankle feels good. As if the scratch never happened.

“Let’s go!” you bellow, full to the max on adrenalin.

The best man is beside you, a wary look in his eyes. “I don’t think that vaccine is working on you,” he says.

You see the fear in his eyes. Has the vaccine worked, or are you turning into one of them? You’re not so sure, now your hands are turning green. You charge forward regardless, hoping Tank Street will be your way out. Head South onto Tank Street (Once Again) until you reach North Quarter Lane on your left.

Go To Once Again (Tank Street).