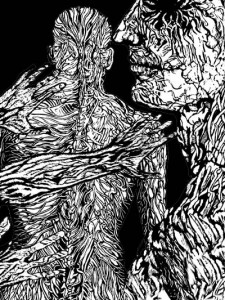 Falling from Above (275 George Street)

You can’t find the city bikes, but you’ve found another art piece. Inside the laneway, there’s a busy plaza, with screaming shoppers, and zombies feeding on their flesh in the restaurant where those people were dining moments before.

Gosh, how you wish these zombies would just return to wherever they came from like the artwork depicts. But they can’t. They’re like you, or once they were. And you might be just like them, if you think about that scratch on your ankle.

Your phone rings. It’s Morgan, a Uni friend who’s always full of facts and trivia. “Where are you?” he asks.

“I’m in the city,” you say, as you watch a zombie tackle a woman with frightening agility, and devour her arms.

“What’s all that noise?” he asks, relaxed. You shriek as a zombie lunges for you.

Morgan laughs. “Boy, did you pick the wrong day to go into the city. Didn’t you hear? Those students from our Bioscience class last year, they leaked a virus out of the med labs. Something weird is going down.”

“I know!” you shriek again, as you jump sideways from snatching, bloodied hands.

“Well, you gotta run,” he says, “unless you want to save the city.”

Save the city? He reads your thoughts. “Rick Grimes would save the city.” Okay, now he has you. If you were going to turn zombie, at the very least you could go down saving an entire city.

“You got a plan?” you ask, a little sarcastically.

“There’s two ways to do this. One, you can chase the vaccine,” he says. “Heard all about it on Pinterest, and I got the locations Snap Chat’d to me. If you’re vaccinated, you won’t be zombie food. Or, you can bring them to you, with extreme noise. But be smart. Film whatever you do. That’s the only way you’ll prove to anyone that you’ve got this covered.”

An art student on television? Now the possibilities are reeling…for a few reasons. If you save yourself and save the city, the world might know your name. And won’t those dozen art pieces you have sculptured and kept in your spare room be worth something? There’s a chance to make money as an artist before you die…

You press your ear to the phone, and listen hard as Morgan gives you the options.

Infiltration/Trickle: Morgan tells you where the vaccine is. You can take it, walk out of there unharmed. And you’ll need to record it all on your phone if you want to upload it to YouTube. Head West along George Street to Infiltration on Corner of Tank Street and Turbot Street.

Eyes Singing Out: Morgan tells you zombies are attracted to noise. You’ll be risking you’re life, but again, it’ll all be captured on YouTube, and if you survive, you’ll not only pay off those Uni student loans, but you might have a future in full-time work as an artist. Head West along George Street to Corner of Tank Street and Turbot Street until you reach to Eyes Singing Out on 415 Turbot Street.