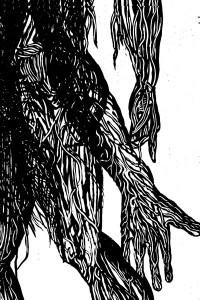 You stand outside of Parliament House, the old man on one side, Mary on the other.

The old man points to the sandstone façade. “I can climb those gates. Get us into the building.”

You look at him. Is he agile enough to climb, really? You’re both desperate. Does it matter?

Mary and the old man look at you. “What did you say?” Mary asks.

“I said…” and you stop. You didn’t say anything. No, you moaned.

At the moment, a cold chill is racing through your veins. And it’s making you feel powerful. Not policy powerful; not like you could sit in Parliament House and debate why education should be free, and why hamburgers should be made to order everywhere you go…

Eek! You’re thinking about hamburgers again. Not the sugary buns. You want the meat. And not flame-grilled. Raw, preferably.

You catch movement on either side of the building. The doors are still closed, but limping bodies spill down the stairs.

“I’m going over the gates!” the old man says.

Too late. A staff member launches towards the old man, strangling him with a death-grip. The old man screams for help as the zombie rips into him. You watch on for longer than you should. You find your horror turning into a strange desire to join alongside the staff member.

“So, where did you say your parents were?” you ask Mary. What’s there left to do but help her?

Follow Mary as she takes you to the tree behind the QUT sign. Walk past Parliament House on your right, on the path next to the Botanic Gardens, and within several hundred metres, you’ll see a QUT sign on your left. Turn down the path on your left a few metres.