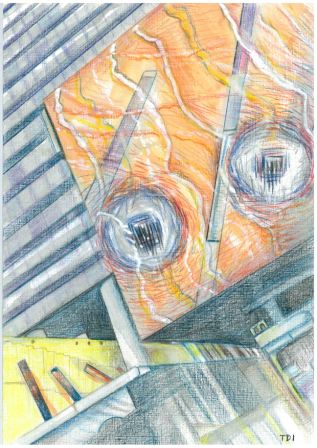 The four Brisbane Square Library cubes above you flicker, turning into giant displays showing static and the occasional number.

This is the first time you’ve been uploaded into the Brisbane Nexus, and you expected it to be more exciting. Where are the welcoming tutorial programs? Where are the hyper-realistic fireworks you were promised? The flower necklaces? They didn’t even digitise you wearing a hyper-colour Nexus shirt! It looks the same as the real world. There are people wandering around, but most look like they know where they’re going, so they’re probably simulations.

There seem to be some fellow digital travellers, but it’s not easy to tell real from fake here.

You check the Digital Assistant Phone that was issued when you signed the waiver form. There’s no Nexus tower signal, only the icons you would expect in the real world. Odd.

The straight lines of Reddacliffe Place flicker again before settling. Finally, the giant coloured cubes of the Square Library start to glow brighter, and then the nearest cube turns into a display with a glowing pair of eyes in the middle. The eyes seem wider than you’d expect, a touch too excited. They glance down at you and go even larger.

“Welcome digital traveller! I am the Brisbane Nexus Guidance Program. Welcome to the Nexus!

“Please look around you and identify your nearest Brisbane Nexus data nodes. These are cleverly disguised as yellow and/or silver Brisbane City Council rubbish bins for the Simulation. Your Digital Assistant Phone, or DAP, will highlight active data nodes in your area. Why not interface with one today?

“Before you enjoy the sights and sounds of our ‘Brisbane: The River City’ Virtual Reality Simulation, please listen to today’s brief list of system outage notices:

The other display screens start flashing red. ‘EMERGENCY REPAIR SYSTEM ACTIVATED’. A whirring sound fills the air, coming from the steamballs around you. Suddenly a wave of tiny metal ball bearings bursts out of the holes, they spin past your feet in a beautiful swirl and towards the river before making a sharp right and disappearing out of sight around the Library.

Above you the giant face continues to mumble.

“I don’t think it’s coming out of that loop,” a quiet, measured voice says. You can’t quite place where it’s coming from; it’s all around you, almost as if it’s being projected out of the tiles and squares and windows.

“Don’t bother looking, I’m everywhere.  I’m woven into the architecture of this place. I’m everything the guidance program isn’t, grown into the substrate of the Simulation and free to think what I want. The Simulation is a little too…shall we say…rigid? Too mathematical. ” The voice pauses. “Do you want to take it for a spin while the guidance program is…doing whatever it’s doing?”

You look up at the guidance program which is still loudly thanking someone for candy.

“I’m Dominique-3,” the voice says. “But you can call me 3-Dom. It sounds like Freedom, see?” 3-Dom seems particularly proud. You guess computer programs think that they’re funnier than they really are.

“Do you see the Treasury building across the plaza? Brisbane used to be very much like it, before everything turned into skyscrapers and high rises. I remember, though. Back when the Simulation was new. They tried all sorts of experiments the guidance program didn’t like. Too risky. Simulation Visitors might get trapped if you muck around too much. ‘Realspace overflow’. But you like it here, don’t you? It’s a little exciting, isn’t it?”

You’re not sure what to make of it to be honest. The Treasury building is certainly beautiful, and such a contrast to the much more modern design of the Square Library. The Library Reed windows have a certain abstract artistry of their own, though.

“Did you want to see what we can do to this place?” 3-Dom whispers. “The guidance program is going to be busy for a while. I can push some prettier buildings around. You heard what it said, ‘The architectural stability programs are: currently unavailable’…Interface with me at the EG data node just around the corner on Elizabeth Street. You can’t miss it.”  3-Dom’s voice fades away and you’re left alone. With the guidance program talking in circles there’s no obvious way out of the Simulation.

EG Data Node: Go to the EG data node and find out what Dominique-3 is getting up to (On the bin closest to the corner of Elizabeth and George Streets).

AD Data Node: Go to the AD data node to help the Emergency Repair System fix the guidance program and get out of here before the whole place falls apart (On the bin next to the Library entry on Adelaide Street).