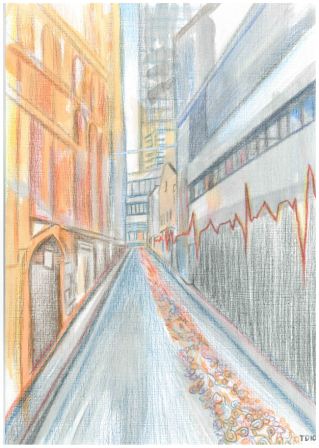 You reach the far end of Burnett Lane, which runs like a military No-Man’s-Land between the flat geometry of the Metricon and the exuberant hodgepodge of 3-Dom. As you look towards George Street, you see to your right how the walls run ruler smooth, blocked and segmented, black and white and neatly divided. Occasionally a flickered pulse, like a heartbeat, runs along the length of the wall, checking its integrity. On the left, 3-Dom has extruded architecture and art from the joins between buildings. As you watch you’re sure you see more and more arches, windows and cornices. A sliver of 3-Dom has crept into the road itself, paving a flower path along the length of the street.

When you glance back at the Metricon border you notice the pixel grid of tiles snapping into place up its black sides, like heat tiles on a spacecraft. At the same time 3-Dom’s wall fights for your attention with colours and corners and an almost palpable history. Does each window hold a story? You notice some of the windows are blocked solid. Is that Metricon exerting its influence across the lane? You can’t see any sign of the little Emergency Repair System ball bearings.

“This place makes me nervous,” says the Emergency Guidance Bot at your shoulder. “The Emergency Repair System has sacrificed itself and frozen these two warring sides in the middle of battle, but at any moment–”

Something flickers in the corner of your eye. It flits out of sight towards the centre of the Queen Street Mall. It looked like some kind of glowing, gigantic butterfly. Wait, a butterfly?

The Guidance Bot swoops around the walls scanning the architecture. “This place is safe for now. Scanners tell me that Metricon has shaped a massive tunnel in George Street and is cutting a path towards the Log Out terminal on King George Square.

“At the same time 3-Dom is attempting to confuse Metricon by cocooning the Metricon architecture at the Wintergarden Mall on Queen Street.”

There’s a sudden dull roar and the brickwork on the left-hand side of the alley shimmers. The ground shakes beneath you.

“That came from King George Square!” You can see numbers and calculations shimmering over the Guidance Bot’s surface.”Metricon is flattening everything! I’m not sure how you can get out without a dedicated Log Out terminal. Maybe 3-Dom can help, or maybe you can salvage the KGS data node.”

The walls on either side of you are starting to shift. The Emergency Repair System’s efforts are fading. You have to get out of here!

KGS Data Node:  Choose to run out of the alley onto Albert Street and turn left towards King George Square to see if you can access the Log Out Terminal at the KGS Data Node? It’s the bin nearest to the church on the far edge of the square.

WG Data Node: Try to help 3-Dom stop Metricon and claw back control of the Nexus? Turn right onto Albert Street and run through the arch, then left at the Queen Street Mall central crossing. You will find the WG data node near the Wintergarden conversion wall and restaurant in the middle of the Mall if you look hard enough.